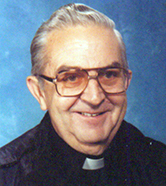 NORMAL — A memorial Mass was offered at Epiphany Church here on Friday, April 17, for Father John J. King, the founding pastor of Epiphany who served the parish for 29 years.

Father King, a senior priest of the Diocese of Peoria, died on Monday, April 6, 2015, at Barnes-Kasson Hospital in Susquehanna, Pennsylvania. He was 92.

A funeral Mass was offered on April 10 at St. John the Evangelist Church, 15 E. Church St., in Susquehanna. Burial was in his hometown of Starrucca, Pennsylvania, where he had resided since his retirement in 1995.

PENNSYLVANIA NATIVE
Born Nov. 26, 1922, in Starrucca to Daniel and Katherine (Gilleran) King, Father King attended St. Bonaventure University and completed his studies for the priesthood at Christ the King Seminary, both in St. Bonaventure, New York.
He was ordained for the Diocese of Peoria by Bishop John Mark Gannon on May 6, 1948, in Erie, Pennsylvania.

In a Catholic Post story on the occasion of his 60th anniversary of ordination in 2008, Father King explained that he came to the Midwest rather than staying in Pennsylvania because the rector of his seminary and then-Peoria Bishop Joseph H. Schlarman were friends. He was presented the option to serve in the Diocese of Peoria, and accepted it.

In 1960, Father King was named pastor of St. Patrick Parish in Camp Grove, where he served for six years. He became founding pastor of the new Epiphany Parish in Normal in 1966.

“EXCITING YEARS”
“These were to be exciting years as the parish grew and developed,” Father King would later recall. He led efforts to retire the debt on the convent and school which had been built prior to his arrival, raised funds for the construction of the rectory, and oversaw plans for the new church, dedicated in 1973.

“I was there for 29 years, but it didn’t seem that long,” he told The Post, praising the “graciousness and charity” of those he served in Normal and at all his assignments. He received the “Citizen of the Year” award from the city of Normal in 1995 for his service and for being “a major spiritual force” in the community.

He is survived by a sister, Genevieve (King) Leet; two nephews, a great-nephew and two great-nieces.

Memorial donations may be made to the Little Sisters of the Poor, Holy Family Residence, 2500 Adams Avenue, Scranton, PA 18509.