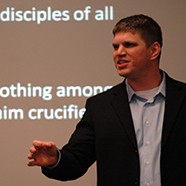 Photo Caption: Andy Meister of St. Jude Parish in Chillicothe makes a point during his presentation at the Faith-Based Leadership Seminar at the Spalding Pastoral Center in Peoria on March 28.

Leaders are often known for inspiring speeches, like Dr. Martin Luther King’s “I Have a Dream” or General George Patton’s motivational address to the United States Third Army in World War II.

The keynote speakers at the Diocese of Peoria’s Faith-Based Leadership Seminar on March 28, however, emphasized that in order to best lead others, one should first find quiet time and listen — to God.

“Listening to what God is telling me has been key to important times in my life,” said Becky Shimp, a junior high math and science teacher at St. Edward School in Chillicothe. Shimp, who has taught at St. Edward for 25 years, is the Diocese of Peoria’s 2014 Distinguished Teacher of the Year.

Sharing stories from her life and teaching career with about 50 conference participants at the Spalding Pastoral Center in Peoria, Shimp detailed several times when she was able to recognize signs from God offering clear direction as she faced challenging choices.

“Finding a quiet time alone to hear what God is saying — be it running, walking or sitting in silence — has been a key to me making faith-based decisions,” she told the group.

“Your relationship with God is going to be dependent on how much you talk and listen to him,” said Meister, a member of St. Jude Parish in Peoria who at age 26 has already founded a business and is an engineer with Caterpillar.
“Do you allow yourself quiet in the course of your busy day to be able to encounter God? That’s what changed my life,” said Meister.

CHOSEN BY GOD, WHAT’S OUR CHOICE?
Shimp and Meister were major presenters at the annual morning designed to help Catholics integrate faith in everyday life, especially in the workplace. The event began with a Mass at the Our Lady of Perpetual Help Chapel that was also attended by dozens making a Cursillo Day of Renewal.

“Where is Jesus Christ expendable when it is difficult to follow in his footsteps?” asked Father Paul Langevin, OFM Conv., parochial vicar at Holy Family Parish in Peoria who was celebrant and homilist. Saying we are God’s “chosen ones” called by name, Father Paul asked, “Have we chosen him?”

There are opportunities to make that choice daily, said Jack Desatnick, moderator of the Faith-Based Leadership Seminar.

“We are under attack as Catholics and Christians,” said Desatnick, contrasting Christian beliefs with what today’s culture considers “politically correct” in areas ranging from pro-life to the celebration of Christmas. Desatnick founded the annual seminar in 2010 to let people know “it’s OK to be Catholic in the workplace.”

“When we meet the Lord,” said Desatnick, “I don’t think he’ll ask, “‘Were you politically correct?'”

LEADING LIKE CHRIST, TO CHRIST
Shimp expressed gratitude to be able to teach in a faith-filled school. Noting there is “a lot of drama” in the lives of junior high students and that she is often called on to be a negotiator or counselor as well as a teacher, Shimp said “thank goodness I can use my faith to come up with a way to help the students in these junior high moments.”

When she taught at a public school early in her career and was not permitted to talk about God, “it did not prevent me from praying for the students privately,” she told the group.

Meister, meanwhile, said faith-based leadership always leads people to a deeper encounter with Christ, who is “goodness, truth, and beauty.”

“Your leadership potential is unlimited because the extent that Christ can shine through you is limited only insofar as you permit him to come and do so,” said Meister, a former student at the United States Military Academy in West Point in New York who later served as a missionary with the Fellowship of Catholic University Students (FOCUS).

He challenged Catholics to look at their relationships — in marriage and family, friendships, and at work — and ask how often, if ever, they say the name of Jesus Christ and talk about him.

“In every relationship we have, are we allowing Christ to define it and to lead us?” he asked. “Are you willing to change the way you view every person you meet as a brother or sister who Christ has put in front of you to love?”

Meister said there have been “countless people who have loved me in the way I needed to be loved,” including his parents, Steve and Theresa, who were present at the seminar. Another was Shimp, who taught him at St. Edward School in Chillicothe. Meister drew laughter when the first image of his slideshow was a 15-year-old photo showing his grade school class at St. Edward posing with Shimp.

He said he was honored to speak “after someone who has affected me in quite an amazing way.”

Guiding small group discussions following each talk was Dodie Gomer, who said a Catholic leader should set expectations high because “our Lord’s expectation is the highest.” Deacon Greg Serangeli dramatically demonstrated Christ’s sacrifice for us by leading meditations before each of the sorrowful mysteries of the rosary.