Making “pysanky”: a form of Lenten prayer pointing to Easter 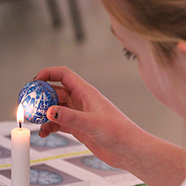 Photo Caption: The design for her pysanka emerges as Lauren Woodley of Immaculate Conception Parish in Manito holds it to the candle’s flame.

CHAMPAIGN — It’s easy to look at pysanky and see only how beautiful these intricately decorated eggs are. The prayer that goes into creating them, however, adds a luster that goes far beyond beeswax and festive dyes.

The Bishop’s Commission on Women gave people an opportunity to learn the prayerful art of pysanky during a workshop at St. Mary Church in Champaign last Saturday. The morning started with a Mass celebrated by Father David Whiteside, spiritual adviser to the commission and pastor of St. Patrick Parish in Havana and Immaculate Conception Parish in Manito.

“It is a form of iconography,” said Cris Potthoff of Bartonville, a member of the self-proclaimed “eggheads” who guided participants through the process. “The idea is when you’re putting the lines on the egg you are praying, meditating on what the symbols are.”

The design used at the workshop was the Butterfly Cross pattern. It incorporated a star, the symbol for Christ; curls or “ram’s horns,” a symbol of God’s protection; and pine needles, a symbol of everlasting life. The butterfly is a symbol of the resurrection.

The symbols are written on the hollowed out eggs by using a kistka. This stylus holds the melted beeswax that is placed on the surface of the egg and protects the color that is beneath the beeswax when the egg is dipped in the dye.

Five colors are often used, starting with the lightest, according to Shelly Janikowski of Davenport, Iowa, who taught the “eggheads” the ancient Ukrainian art form. Five of them came to help the workshop participants on Saturday.

To reveal the designs on the eggs — one is called pysanka, while the plural is pysanky — the beeswax is melted again by holding the egg to the flame of a candle and then gently wiped away on a paper towel.

NO GREATER HOPE
“Once you start working on an egg, everything falls away,” said Janikowski, who learned how to make pysanky after receiving an egg as a gift in 2002. Thinking “everything is better with a group,” she taught the others who work with her and they have been giving workshops since 2006.

Busy throughout the day, the Ukrainian women would do this at night, when they could turn their focus inward toward their spiritual life, Janikowski said. The prayer enhanced their Lenten fasting and had an element of almsgiving, too.

“You generally don’t keep the pysanka for yourself — you give it away,” she told The Catholic Post.

Pysanky made during Lent are blessed at Easter and then presented as gifts. Janikowski said they are often given at weddings and may even be placed in the casket at a funeral as a symbol of hope in the resurrection.

“The Easter feast is so wonderful,” she said. “Christ is risen — truly risen. There’s no greater hope than that.”