Both sides of story lead to book by Marquette history teacher 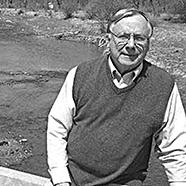 Photo Caption: Heinz-Dietrich Suppan, author of “Remember Indian Creek! In the Shadow of the Black Hawk War,” is pictured with the creek flowing behind him in LaSalle County.

OTTAWA — Every story has two sides and as he collected information about the Black Hawk War and Indian Creek Massacre, Marquette Academy teacher Heinz-Dietrich Suppan found a book waiting to be written.

The result is “Remember Indian Creek! In the Shadow of the Black Hawk War.” The 192-page paperback was published at the end of January by Outskirts Press.

“When you look into something you find all kinds of new things you never thought about or knew,” said Suppan, who has taught German and history at Marquette for 32 years. “I tried to give an overall survey of all the little things that came together. . . . I was on a paper chase.”

That chase started about 10 years ago, when he developed a one-semester class on state and local history. From the glaciers in Illinois to the early settlers and the American Revolution to how Illinois became a state, Suppan teaches “things the kids should have knowledge of.”

Among them is the massacre at Indian Creek, which is occurred about 11 miles north of Ottawa.

Suppan explained that one of the first settlers to the area, William Davis, built a cabin and a blacksmith shop so he could fix tools for the farmers. Because he needed a source of power, he built a dam in the nearby creek. When the Potawatomi Indians who also used the creek came to find out why they no longer had access to the water and the fish in it, they were dismissed.

Shabonna, a Potawatomi chief, warned the settlers to move to one of the forts in the area and many listened. Sixteen of those who remained were killed on May 21, 1832, and two sisters, Rachel and Sylvia Hall, were taken captive.

The Indians later said the only reason they didn’t kill the sisters is because the girls waved to them as they walked to the dam to go fishing, according to Suppan.

The girls were returned eventually and one of Rachel Hall’s descendants would go on to attend Marquette. Another relative of the sisters, Jane Mills, teaches at the school.

“The more I heard, the more interested I got,” Suppan said.

The paper chase led him to Shabbona Lake State Park and the monument that sits on the graves of the Indian Creek settlers. Last spring, he found Rachel Hall’s grave marker buried in a farm field.

SOMETHING IMPORTANT
While the Indian Creek Massacre happened during the Black Hawk War, the two weren’t connected, although some people couldn’t separate them. Trying to find both sides of the war, however, he discovered how a contested land treaty fueled hostilities.

“Some people call it the unnecessary war because so many things could have been done to prevent it,” Suppan said.

The longtime teacher is used to finding ways to help people understand new concepts and ways of looking at things. Raised in Springfield by an Austrian father and German mother in a home where German was spoken, Suppan served as a translator during his four years in the U.S. Air Force.

He decided to become a teacher on the advice of a friend and found his life’s calling. In addition to his work at Marquette Academy, Suppan teaches history at Joliet Junior College.

He and his wife Leslie are members of St. Columba Parish in Ottawa.

While the process of writing and publishing a book sometimes exasperated him — “I must have had to proofread it four times” — he looks at the book now and says, “Did I actually write this?”

“I found a little kernel and developed it into something important,” he said. “Folks ought to know what happened.”