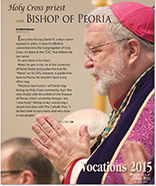 Photo Caption: Bishop Jenky describes how his lifetime commitment to the Congregation of Holy Cross adds to his ministry as Bishop of Peoria in the cover story of The Catholic Post’s special section on vocations.

EDITOR’S NOTE: The following is the cover story of a special section on vocations in the March 15 issue of The Catholic Post. To view the entire section, visit our E-Edition.

Every time Bishop Daniel R. Jenky’s name appears in print, so does his lifetime commitment to the Congregation of Holy Cross. It’s there in the “CSC” that follows his last name.

It’s also there in his heart.

When he gets in his car at the University of Notre Dame and pushes the icon for “Home” on his GPS, however, it guides him back to Peoria. He wouldn’t have it any other way.

“Peoria is now home. I will never stop loving my Holy Cross community, but I live very closely with the priests of the Diocese of Peoria, which, unworthy though I am, I now head,” Bishop Jenky said during a recent interview with The Catholic Post. “I do feel close to our priests and very close to our people.”

What the Diocese of Peoria gains from Bishop Jenky’s formation as a Holy Cross priest is a deep devotion to family and a life built on the foundation of “common work, common table, common prayer.”

“When we arrived at the novitiate, we went to see the superior, which was rather intimidating, kneeling next to his desk,” Bishop Jenky said of his first day at the Holy Cross Novitiate in Bennington, Vermont.

“But we then went swimming, had a cookout, and then prayed Benediction and Compline in common,” he said. “We were taught to be part of the family of Holy Cross, to very much depend upon one another and the common life. . . . We were trained from the beginning to be part of this family.”

When Blessed Basil Anthony Marie Moreau founded the community in Le Mans, France, he also incorporated the Brothers of St. Joseph. In time, his “family” included a women’s community, now known as the Sisters of the Holy Cross in the United States.

Blessed Moreau’s model was the Holy Family, and he consecrated the priests to the Sacred Heart of Jesus, the Brothers to “the pure heart of St. Joseph,” and the Sisters to the Immaculate Heart of Mary. The patroness for the whole Holy Cross community is Mary as Our Lady of Sorrows.

Bishop Jenky said Blessed Moreau sent his new community out on mission very early. One of the priests was Father Edward Sorin, who came to the United States in 1841 and founded the University of Notre Dame in 1842.

Bishop Jenky earned a bachelor’s degree in history there in 1970 and a master’s in theology in 1973, the same year he made his perpetual profession of vows with the Congregation of Holy Cross and was ordained a transitional deacon. He was ordained to the priesthood on April 6, 1974, at Sacred Heart Church at Notre Dame.

He remains a fellow and trustee at the University of Notre Dame.

A SIGN FOR THE CHURCH
Like most religious communities, Holy Cross priests take vows of poverty, chastity and obedience. In “Consecrated Life,” his 2015 Festival Letter honoring the Year of Consecrated Life called for by Pope Francis, Bishop Jenky explains that these Evangelical Counsels “embody a communal form of utter dependence upon God and total commitment to neighbor.”

During his interview with The Post, he called consecrated life “a sign” that has been given to the church as one way of living a Christian life.

“It’s not the only way, but I think if the Brothers of St. John or The Sisters of the Third Order of St. Francis or the Salesian Fathers who are now in Champaign live their life intently, it helps married couples, it helps single people — not just by their apostolates, but by who they are,” Bishop Jenky said. “I think it builds up Christianity.”

The Sisters of the Third Order of St. Francis, based in East Peoria, are not only a major corporation with medical centers and clinics that care for the sick, they are Sisters who live together, work together and pray together, he said.

Bishop Jenky also pointed to the Sisters of St. Benedict at St. Mary Monastery in Rock Island, who come together throughout the day to pray. “They have their apostolates, too, but part of what they do for the Diocese of Peoria is have quality time with the Lord, praising him, thanking him, adoring him, interceding for the church day after day, year after year.”

He said all vocations — priesthood, consecrated life, married life and single life — ideally build up one another.

REMARKABLE FRATERNITY
While he will always remain a member of the Congregation of Holy Cross, Bishop Jenky has been dispensed from the vows of obedience and poverty. His obedience is to the pope, not to Father Thomas J. O’Hara, CSC, the superior of the American Province of Holy Cross, or to Father Richard V. Warner, CSC, the superior general, although he knows both well.

And because Holy Cross is a family, “we’re all in each other’s faces. I get lots of free advice from my confreres,” Bishop Jenky said with a laugh.

Bishop Jenky enjoyed the common life of his community and maintains that by joining the seminarians and priests for Holy Hours and other prayerful celebrations at St. Mary’s Cathedral in Peoria.

“I always like to sit in the very back of the cathedral. Everybody’s focused in one direction,” he told The Post. “I have always found that life giving.”

And from time to time he wears his religious habit while hearing confessions, praying at adoration, or visiting religious houses around the diocese.

“It’s part of my baggage and it means a lot to me,” he said simply. “I received it on my knees.”

One of the many things Bishop Jenky loves about the Diocese of Peoria is the “remarkable amount of fraternity among the priests. Some bishops find it hard to have priest-friends from where they are. I’ve never found that here. I feel very comfortable at confirmation dinners and when the guys are at my house.”

He also likes the way the diocese “gets together” and said, “I love the way the seminarians have a lot of things they do together in the course of the year.”

In the end, Bishop Jenky said religious life is meant to be “leaven in the bread of the church.” Not everyone is called to religious life or the priesthood, but he advised those who think they might be to test the call.

“What pops that idea into someone’s head? I would say the Holy Spirit,” he said. “Even if they try it and don’t like it or the order decides they don’t fit, it would not be a waste of anyone’s time.”