Diocesan choir is forming for nine-day pilgrimage to Italy 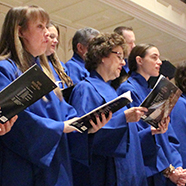 Photo Caption: Singers from all over the diocese are welcome to join the choir, which will depart from Chicago on Dec. 30, and return on Jan. 7, 2016. The trip is also open to anyone wishing to travel.

If St. Augustine is right and “those who sing pray twice,” the diocesan choir that is forming to tour “Majestic Italy” is going to be doing a lot of praying as the New Year arrives — and some of it will be with Pope Francis at St. Peter’s Basilica.

Forming the core for the nine-day choir pilgrimage are the St. Anthony Camerata Choir of Bartonville, under the direction of Mary Ann Fahey-Darling, and the St. Mary’s Cathedral Schola, under the direction of Greg Etzel. Traveling with the group will be Msgr. Stanley Deptula, rector of St. Mary’s Cathedral and director of the Office of Divine Worship.

Singers from all over the Diocese of Peoria are welcome to join the choir, which will depart from Chicago on Dec. 30, and return on Jan. 7, 2016. The trip is also open to anyone who would like to travel with the group.

“There is not a limit,” Fahey-Darling told The Catholic Post. “We are going to begin our rehearsals at the end of April and rehearse every other week at the cathedral.”

A highlight of the pilgrimage will be singing for the papal Mass on the Solemnity of the Epiphany. Not only will the choir be one of two adult groups to join a 200-voice youth choir during the liturgy, but the singers from the Diocese of Peoria have been invited to sing the postlude, Handel’s “For Unto Us a Child is Born.”

“It’s a pilgrimage, a spiritual pilgrimage. That’s why we’re taking a spiritual director,” Fahey-Darling said. “It’s exceedingly important to me.”

In addition to Mass every day, there will be evening prayer, she said.

“It builds an amazing camaraderie with people when they share in the whole spiritual aspect of it,” according to Fahey-Darling. “Yes, we have a great time . . . but we pray together and we play together. It’s great fun to do both.”

VARIETY OF MUSIC
The music directors said being able to perform Christmas music is a bonus. The repertoire includes “O Magnum Mysterium” by Morten Lauridsen and “Ave Maria” by Franz Biebl, as well as “The Beautiful Mother” by Father John Foley, SJ, “Dixit Maria” by Hans Leo Hassler and “Lux Aurumque” by Eric Whitacre.

Also coming is Carol Wake from St. Vincent de Paul Parish in Peoria, who will direct an arrangement of “Child of the Poor/What Child is This” by Scott Soper and “Ding Dong Merrily on High,” a 16th century French carol.

The group will be accompanied by Steve Harms of St. Anthony in Bartonville.

To help people prepare and accommodate singers who may live at a distance, rehearsal CDs will be made for home study between rehearsals.

“This is an opportunity for people to learn things they’ve never done before,” Fahey-Darling said. “Singing regularly is helpful, but we’re not going to turn anyone away.”

Etzel said outreach has been one of his goals since he was named director of sacred music for the Diocese of Peoria. He has been trying to bring in additional choirs for confirmation Masses and pontifical liturgies at St. Mary’s Cathedral and “the chance to collaborate on a trip like this falls in line with all of that.”

He also sees this as a catalyst to bring back festival choirs for diocesan celebrations.

The cost for “Majestic Italy” is $3,900. The deposit of $350 is being accepted now and those who are interested are encouraged to contact Etzel at getzel@cdop.org or Fahey-Darling at maryann@faheys.biz soon so that music can be ordered and other arrangements made.

“We are humbled and honored to be able to put together this magnificent trip and to be able to sing for this amazing Holy Father,” Fahey-Darling said.