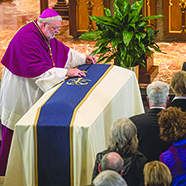 Photo Caption: Bishop Jenky places the Profession Cross of Father Theodore Hesburgh, CSC, on his casket during the funeral Mass for the longtime president of the University of Notre Dame on March 4.

A calm leader. A great storyteller. A good religious. Intelligent. An extremely kind man, devoted to his priesthood.

Those are just some of the ways Bishop Daniel R. Jenky, CSC, described his longtime friend and brother in the Congregation of Holy Cross, Father Theodore Hesburgh, CSC, who died Feb. 26 at the age of 97.

“I had a lot of interaction with him over the years,” said Bishop Jenky in an interview with The Catholic Post after returning from Father Hesburgh’s March 4 funeral at the University of Notre Dame. “He taught me a lot and gave me good advice.”

Bishop Jenky met the legendary president of Notre Dame in 1965 when the bishop was a young postulant in the religious community. By that time, Father Hesburgh had already been university president for 13 years. He would serve in that capacity for 22 more.

Over the next decades, the paths of Bishop Jenky and Father Hesburgh crossed often as Bishop Jenky took on many roles at the university and in the religious community.

“Even during my college years I was master of ceremonies for a lot of events — building dedications, funerals,” recalled Bishop Jenky. “I was holding the book and handing Father Ted the holy water sprinkler.”

In later years there were fundraising gatherings, meetings of officers of the congregation, and social events as Bishop Jenky served as rector of residence halls, rector of Sacred Heart Church on campus, director of campus ministry, and as religious superior of Holy Cross priests and brothers at Notre Dame. He remains a university trustee.

“HE KNEW HOW TO LEAD”
“If he weren’t a priest, he could have easily been a general in the army,” said Bishop Jenky of Father Hesburgh. “He knew how to lead. When everybody else was shaken by something, Father Ted would be very calm and give orders, ‘You do this,’ ‘You do that.'”

Bishop Jenky learned from Father Hesburgh’s example, and sometimes by his words of sound advice.

Early in his priesthood, Bishop Jenky had to fire a residence hall janitor. Shortly afterward, he saw Father Hesburgh in a lunch room.

“Dan, when you fire somebody, fire them,” the bishop recalled Father Hesburgh saying. “And don’t look over your shoulder, or you can’t be in charge of Dillon Hall or anything else.”

Those were tough words coming from “an extremely kind man,” said Bishop Jenky. “But you don’t stay president for 35 years without saying ‘This is what we’re going to do, you’re either with the team, or not.'”

Bishop Jenky said he recalls that advice when he has to make hard calls as bishop. “I remember he also said, ‘you’re not always going to be right, but you can’t second guess yourself or you’ll drive yourself crazy.'”

“THE PRIESTHOOD WAS EVERYTHING”
Catholics of the Diocese of Peoria should know that the most important part of Father Hesburgh’s life was his priesthood, said Bishop Jenky .

“The priesthood and the Eucharist was everything in his life,” recalled the bishop, especially noting Father Hesburgh’s deep devotion to the rosary. “He was a very devout man.”

While Father Hesburgh traveled widely and rubbed elbows with world leaders, the bishop said he treated everyone equally.

“He was extraordinarily nice to my parents,” said the bishop. “He would talk to Al Jenky the bus driver the same way he’d talk to Henry Kissinger or David Rockefeller.”

Father Hesburgh knew the Diocese of Peoria well. He was a good friend of the late Msgr. Edward Duncan, longtime director of the Newman Foundation at the University of Illinois in Champaign, and gave a number of talks there.

Plenty of dignitaries, friends, and admirers as well as “an army of priests and religious” attended Father Hesburgh’s funeral.

“There were a lot of tears,” said Bishop Jenky. “The university community loved him.” Because Father Hesburgh was the oldest priest in the Congregation of Holy Cross, “nobody has any memories of Notre Dame or Holy Cross without him.”