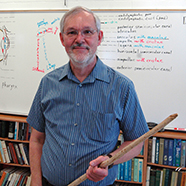 Photo Caption: James Taber holds a favorite pointer (of beaver-chewed wood) in his biology classroom. Bloomington Central Catholic has received a $100,000 endowment in his name from the Keogh Family.

BLOOMINGTON — James Taber is frugal. His biology classroom at Central Catholic High School is a menagerie of living or formerly living things — a few dozen plants, nests of hornets and yellow jackets, and even a stuffed wolverine peering down from a corner shelf.

“I get all of these things for nothing,” said Taber, explaining how students bring in samples from nature for a system of “equal credit” he created to be more fair than traditional extra credit.

But while Taber, a 30-year teacher and longtime chair of the Central Catholic Science Department, has been frugal with a limited science budget, he generously shares his own gifts — his knowledge, his mentorship, his faith and love — with students.

And that’s why, on March 5, the family of a former student was generous in return. At a news conference and school assembly, it was announced that the Keogh Family has awarded Central Catholic with $100,000 to establish the “James Taber Endowment Fund for Science Education.”

The endowment honors Taber “for his lifelong commitment to outstanding science teaching and the development of future scientists and teachers.”

“PROFOUND INFLUENCE”
The gift was made by Steve and Mary Keogh, whose son Scott was among Taber’s first students at Central Catholic. A 1987 graduate, Scott now heads the Department of Evolution Ecology and Genetics at The Australian National University in Sydney. He is one of the world’s leading researchers on snakes.

Steve and Mary Keogh made the gift in memory of Steve’s parents, Nace and Francie Keogh. But the inspiration was clearly Taber, who received multiple standing ovations during the 30-minute assembly.

Representing the Keoghs at the assembly was another of Taber’s early students, Michael Heinz, who is now Chair of Science at Downers Grove North High School.

“Mr. Taber shares his gift every day,” said Heinz, his voice breaking with emotion as he recalled the “profound influence” the teacher had on his life and career. “His gift is to make other people realize what their gifts are. He saw things in me that I wasn’t able to see in myself, and I think he does that on a regular basis.”

Noting the school’s team name of “Saints” and defining a saint as “someone through whom we catch a glimpse of what God is like and what we are called to be,” Heinz recognized Taber for his “saintly work.”

“We hope this endowment from the Keogh Family is a catalyst for what can come to promote science education in today’s world.”

“FELL IN LOVE WITH THE KIDS”
In accepting the award and expressing gratitude to the Keoghs, Taber demonstrated why he is regarded with such respect and affection.

“When I came here I was planning to only teach two years,” said Taber, who has bachelor’s and master’s degrees in biological sciences from Illinois State University. Health issues prevented him from going on for a doctorate as planned.

“And then I fell in love with the kids,” he said, looking at the hundreds of young faces in the auditorium. “These are the greatest kids in the world.”
“You guys,” Taber added with sincerity backed by three decades of evidence, “I love you.”

The robust applause indicated the feeling was mutual.

Taber also fell in love with Central Catholic High School, where he has worked with three principals to expand the science department. In addition to biology, he has taught chemistry, physics, algebra, life science and physical science.

“This place is everything to me,” said Taber. “When I retire from here, I want to volunteer here.”

Perhaps most importantly, Taber — who was not raised Catholic — fell in love with the Catholic faith. So did his wife, Carrie.

“One day we were in the living room and one of us mentioned — and we don’t remember which one — ‘did you ever think of becoming Catholic?'” he told The Catholic Post. “And we were ecstatic because we arrived at the same point at the same time.”

Both were received into the church in 1991 and are active members of Epiphany Parish in Normal. All five of their children are Central Catholic graduates. Two of the Tabers’ daughters are Catholic high school theology teachers, including their oldest daughter, Kathy McEldowney, who like her father teaches at Central Catholic.

Asked how he might use the funds the endowment will provide, Taber said that instead of buying stations for labs or probes for physics one by one, the purchase of entire setups will be possible.

“As long as Mr. Taber is teaching here, he has say,” Foster told The Catholic Post.