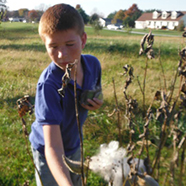 NAUVOO — Monarch butterflies have been winging their way into the hearts and imaginations of the students at Sts. Peter and Paul School here for many years. The school recently received a grant from the National Catholic Educational Association to make certain that this relationship can continue long into the future.

Principal Lisa Gray said Illinois is one of the states along the migratory path of the Monarchs, who travel from Mexico in the spring and return as summer ends. That migration is in trouble, however, because the milkweed plants on which the butterflies lay their eggs and the caterpillars feed is in short supply.

Gray said the $2,200 Monarch Rescue Grant will enable Sts. Peter and Paul School to build and maintain a butterfly garden and develop a science learning module to go with it. The garden will be located southeast of the school building, in front of Connie Lake’s classroom.

Lake is the teacher-leader for the project and her fifth and sixth grade students will take the lead in maintaining the garden, gathering data on how it is being used by the butterflies, bees and other pollinators, and then reporting the results to their classmates and the community. Assisting her will be retired science teacher Deb Moffitt, who has done much of the “leg work” in terms of the research, according to Gray.

READY TO START
“The students are so excited about it,” Lake told The Catholic Post during a recent telephone interview. “They’re ready to get the shovels out now.”

The snow on the ground makes it clear that it will take a bit longer for the ground to be ready, but Lake said, “It would be lovely if we could get something done by the end of March or April. We will start germinating the plants inside before that.”

Lake and Moffitt are in the process of determining which plants should be included in the garden and what will have the best chance of flourishing indoors. The grant requires that the garden contain at least 10 milkweed plants and students started gathering pods last fall.

In addition, the garden must contain nectar plants for the butterflies to feed on as they return to Mexico.

Lake said they hope to mount a camera on the school so they can observe if deer or other “critters” are coming into the garden at night. Since it must be maintained during the summer months, when school isn’t in session, the fifth- and sixth-graders will line up volunteers to help them.

While the older children will do much of the work on the Monarch Rescue Grant, all of the students will be involved in the learning. That already happens each year, for example, when a net is hung in the hallway and caterpillars are placed inside.

“The children grab the little ones and drag them along,” Lake said. “Once a caterpillar escaped and ended up on the wall outside my classroom. Children from the other grades were sitting outside, waiting for the butterfly to emerge.”

IMPRESSIVE PROPOSAL
Sts. Peter and Paul School was one of 10 schools to receive a Monarch Rescue Grant, according to Heather Gossart, director of special projects for the NCEA’s New Directions Initiative.

“The winning schools blew us away,” she told The Post. “We were so impressed by what we saw.”

Not only were the schools required to talk about developing the garden and learning module, but how they were going to incorporate the project across all the grade levels. The spiritual aspect was also very important, Gossart said.
The Monarch Rescue Project was funded by Judith Wagner, who was concerned that future generations would not be able to see the Monarchs.

“She believes this is how this beautiful butterfly will be saved from extinction — by small groups doing their share,” Gossart said.