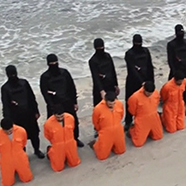 Photo Caption: Egyptian Christians held captive by the Islamic State militants kneel in front of armed men along a beach near Tripoli, Libya, in this still image from a video showing their beheadings.

VATICAN CITY (CNS) — Pope Francis called for prayers for the Egyptian Christians beheaded by Islamic State militants in Libya and asked that God recognize these men killed for their faith.

He offered morning Mass Feb. 17 in the chapel of his residence for the slain Christians he termed “our 21 brother Copts” whose throats had been slit “for the sole reason of being Christians,” and he requested people pray for the victims so “that the Lord welcome them as martyrs.”

He called on people to pray as well for the victims’ families and for Egypt’s Orthodox leader, Pope Tawadros II, “who is suffering so much.” Pope Francis called Pope Tawadros Feb. 16 to express his sorrow over the deaths.

At the end of his weekly general audience Feb. 18, Pope Francis urged the international community “to find peaceful solutions to the difficult situation in Libya.”

And Cardinal Pietro Parolin, Vatican secretary of state, said, “the situation is serious and it demands a united response from the international community — a rapid response, the quickest possible from the U.N.”

Speaking to reporters on the sidelines of a bilateral summit with Italian government authorities Feb. 17, Cardinal Parolin said they talked about Libya and “the importance of re-launching a diplomatic initiative, and that any kind of armed intervention always be done according to the norms of international law and, therefore, that it be a U.N. initiative.”

Egypt, meanwhile, continued to mourn its 21 nationals, who had been working in Libya when the extremist group kidnapped them. Their beheading was depicted in gruesome detail in a video released Feb. 15 on a pro-Islamic State website.

The same evening in a nationally televised speech, Egyptian President Abdel Fattah al-Sisi called on his country’s government to provide full support to the families of the victims and vowed that Egypt maintained the right to retaliate.

In a statement issued Feb. 16 by the Coptic Catholic Church, Patriarch Ibrahim Isaac Sedrak of Alexandria, Egypt, extended his church’s “deepest sympathies” to the families and relatives of the murdered Christians.

In apparent reference to the retaliatory military action his country has since taken, Patriarch Sedrak also extended his church’s “deepest gratitude” to al-Sisi and “our country’s loyal armed forces, especially the air forces, for the rapid response.”

“Egyptian blood is valuable and honorable,” he said.

Speaking after the video of the beheadings surfaced — but before the strikes against Islamic State in Libya were announced — Pope Tawadros offered his church’s condolences to the relatives of the slain Christian migrant workers, most of whom local media reported had been from the same impoverished village in Egypt’s South.