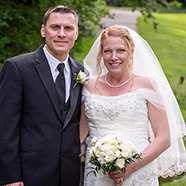 Photo Caption: Ron Cermak and Gretchen Spear, who met at World Youth Day in Denver, were married on June 21, 2014.

Very few people can say a saint brought them together, but that’s what happened to Gretchen and Ron Cermak. Married last June, their love story started during World Youth Day 1993, when Pope John Paul II came to Denver.

“It was finally the right time for us,” Gretchen, now the marketing manager for the Rubber Division of the American Chemical Society in Akron, Ohio, told The Catholic Post by email. “We had to go through our lives on different paths until God knew it was time for us to be together.”

Gretchen Spear had just finished her freshman year at Illinois State University and went to Denver with her youth group from St. Ann Parish in Toluca. Ron Cermak was about to enter his junior year of high school when his youth group from Twinsburg, Ohio, made the trip.

The groups were two of many staying at the same hotel and while the teens were out in the hallway meeting each other, Ron walked by Gretchen’s room. Her roommates had propped open the door and he turned around to introduce himself.

They felt a connection very quickly. On the night John Paul II arrived at Mile High Stadium and Dana sang “We Are One Body” for the first time, Ron presented a rose to Gretchen.

“That was the moment I knew God’s hand may be in this,” she said. “It did amaze me and I knew there was something special there at that moment. There were just so many people there at the stadium. How was it possible that he found me among all of them?”

A LEAP OF FAITH
Gretchen kept the rose for many years, eventually throwing it away in May 2009 when she was going through things at her parents’ house in Toluca. While she was glad to help her parents, Ken and Jane Spear, she regretted her decision to part with the keepsake almost immediately.

It was just a month later when Facebook brought the giver of the rose and its recipient together again. They began to visit one another in 2010, and Gretchen gave up her job at the Hyatt Regency Chicago in 2011 to move to Stow, Ohio, to start the next chapter of their love story with Ron, who is quality supervisor for QSR in Twinsburg, Ohio.

She called it “a leap of faith.”

“I would never have moved if we did not know that we were choosing to truly build a life together — forever,” she said. “It wasn’t a matter of going there to see if this will work. We knew it would. There was no question about it.”

When they married on June 21, 2014, at Holy Family Church in Stow, they selected “We Are One Body” as the Communion hymn.

“The words in that song hold so much significance,” Gretchen told The Post.

“The lyrics convey the purpose of why we were all gathered there at that one event. [Jesus] came that we might have life — not only was this part of the lyrics, this too was the theme of World Youth Day that year.”

But the song has meaning on a personal level, too.

“I sometimes feel like I didn’t truly know/live life until we reconnected so many years later, yet it all actually began for us way back then,” she said. Having “We Are One Body” at their wedding “was a glimpse back to the moment where our story began, as well as reflected the foundation of our life together — a life with God as our foundation.”

The Cermaks live in Stow and their family includes Ron’s sons, Andrew, 15, and Tyler, 13. They are members of Holy Family Parish there.