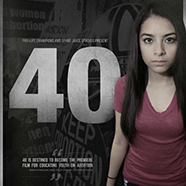 The television debut of the pro-life documentary “40” will coincide with coverage of the annual March for Life on the Eternal Word Television Network.

EWTN will broadcast the hour-long film at 10 p.m. on Wednesday, Jan. 21 — the evening before the anniversary of the U.S. Supreme Court decisions legalizing abortion. An encore presentation is planned on the global Catholic network at 9 p.m. on Saturday, Jan. 24.

“We’re very appreciative how God is working through our movie,” John Morales, director, told about 100 at a Jan. 11 screening of the film at the Family Resources Center in Peoria.

Meanwhile, Morales encouraged parishes, schools, and pro-life groups to bring the motivational documentary to their communities. The director is willing to speak at those events as well.

“We want to go out and give further witness,” he told The Catholic Post, noting “40” has been screened in more than 100 theaters, universities, high schools, and churches across the United States since its premiere on Dec. 11 at Pickwick Theater near Chicago more than a year ago.

“I see the hand of God taking us to all these places,” said Morales, pointing out that seeing the film can inspire people to become active in the pro-life movement.