Diocese ready to prayerfully stand up for the right to life 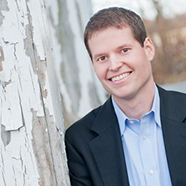 Photo Caption: Shawn Carney, co-founder and campaign director for 40 Days for Life, will be keynote speaker at the Sanctity of Human Life Rally in Peoria on Tuesday, Jan. 20.

People from around the Diocese of Peoria will be standing up for human life in the days to come, although not all of them will be doing it in central Illinois.

Busloads of pilgrims will be traveling to Washington, D.C., for the annual March for Life, while others will attend memorial services, prayer vigils and rallies closer to home to mark the 42nd anniversary of the Supreme Court decision that legalized abortion throughout pregnancy. It is estimated that more than 56 million babies have died as a result of Roe v. Wade, which was handed down on Jan. 22, 1973.

Local observances will begin on Tuesday, Jan. 20, when Central Illinois Right to Life sponsors its annual Sanctity of Human Life Rally. It will be held at 7 p.m. at Riverside Community Church, 207 N.E. Monroe St., in Peoria.

While there will be no walk through downtown Peoria, as there had been in previous years, the Family Resources Center will have an open house from 5:30 to 6:30 p.m. at its new location, 415 N.E. Monroe St.

The speaker for this year’s Sanctity of Human Life Rally will be Shawn Carney, the co-founder and campaign director for 40 Days for Life. The first-ever campaign, which was held in College Station, Texas, in 2004, is credited with reducing abortions there by 28 percent.

Today, 40 Days for Life has been active in 559 cities in all 50 states and 27 countries, including England, Germany, Australia, Canada, Uganda and Russia. In the Diocese of Peoria, there are regular campaigns in Peoria, Champaign, Ottawa and the Quad Cities.

Carney’s website (shawncarney.org) notes that 9,699 mothers reportedly have chosen life as a result of 40 Days for Life, and 107 workers from abortion centers have left their jobs, including Abby Johnson. The former Planned Parenthood director, now a vocal respect life advocate, worked in the clinic next to Carney’s office.

The rally will include updates on pro-life efforts in central Illinois, and refreshments will be available.

Following are other plans to prayerfully mark the anniversary:

On Wednesday, Jan. 21, 40 young people and their chaperones will board a bus for a pilgrimage sponsored by the Diocese of Peoria to the March for Life in Washington, D.C. The bus will board at the Spalding Pastoral Center in Peoria and pick up more pilgrims in Danville.

Shirley Plaag, diocesan director of youth and young adult ministry, said the group includes people from Mendota, Galesburg, St. Mark Parish in Peoria and St. Mary Parish in Kickapoo, as well as representatives from Schlarman Academy in Danville. In addition, Father Geoffrey Horton, parochial vicar at St. Mark, and Father Thomas Otto, parochial vicar at Holy Cross in Mendota, Sts. Peter and Paul in Peterstown, and St. Theresa in Earlville, and Anna Marie Hahn of the diocesan respect life program will be traveling with them.

Peoria Notre Dame, Central Catholic High School in Bloomington, and The High School of Saint Thomas More in Champaign are also sending buses, and a group from the Aledo area will be flying to the nation’s capital, according to Plaag.

She said the diocesan pilgrims will drive through the night, arriving in time for the Life is VERY Good Rally, Mass and confessions at the Patriot Center at George Mason University in Fairfax, Virginia, on Jan. 22. Sponsored by the Diocese of Arlington, the event will feature a presentation by Chris Stefanick, one of the keynote speakers for the Diocese of Peoria’s 2014 Youth Rally, and the Ike Ndolo Band.

They will be sent on their way with a lunch provided by Chick-fil-A and go immediately to the National Mall in Washington, D.C., for the March for Life. In the evening, they will meet with Bishop Daniel R. Jenky, CSC, during a social at the hotel. Students from Peoria Notre Dame and The High School of Saint Thomas More, who are staying at the same hotel, will also participate.

Bishop Jenky will celebrate Mass for everyone from the Diocese of Peoria at 4 p.m. on Friday, Jan. 23, at St. Joseph’s Church on Capitol Hill. A Holy Hour with eucharistic adoration will precede Mass at 3 p.m.

The pilgrims on the diocesan pilgrimage will visit the Holocaust Museum and the St. John Paul II National Shrine, and attend Mass in the Crypt Chapel at the National Shrine of the Immaculate Conception. On their way home, they will stop at Mount St. Mary Seminary in Emmitsburg, Maryland, for a tour and to have dinner with seminarians from the Diocese of Peoria.

Driving through the night again, they are expected back in central Illinois very early on Sunday, Jan. 25.

Plaag participated in the March for Life several times as a student at Peoria Notre Dame and Franciscan University of Steubenville, Ohio, and said it offered her hope.

“When you’re in the pro-life movement you feel kind of alone and very much in the minority, so I think it was impacting for me as a young person to see that there were so many other people my age that were standing up for life,” she told The Catholic Post.

“I also think there was something so incredibly bonding and life-changing about taking these kinds of overnight trips with other young people that are involved in their faith,” Plaag said. “It builds friendships and helps you to know that you can network with other people who have similar beliefs and work together.”

Coverage of the national and local observances will appear in the Feb. 1 issue of The Catholic Post.

BETTENDORF, Iowa — The Women’s Choice Center of the Quad Cities, 2711 Happy Joe Drive, will host a candlelight vigil at 7 p.m. on Thursday, Jan. 22. A rosary will be prayed at 6:30 p.m. inside the center.

The evening also will include prayers outside, on the sidewalk across the street from Planned Parenthood’s Quad Cities Center.

The Women’s Choice Center is a Christian-based ministry founded in 2002 by the Life and Family Educational Trust. It offers free services to women facing unplanned pregnancies, including pregnancy testing, obstetric ultrasound, and local resource referrals, such as adoption referrals.

In November, the Women’s Choice Center became the first pregnancy center in the Midwest to offer a new hormone treatment protocol that attempts to reverse the RU-486 medical abortion.

BLOOMINGTON — Pastor Bob Smart of Christ Church PCA in Normal will be the speaker for a memorial service for the unborn victims of abortion on Thursday, Jan. 22, on the west steps of the old McLean County Courthouse, Center and Jefferson streets. It will begin at noon.

The brief ceremony, which marks the 42nd anniversary of the Supreme Court’s Roe v. Wade decision, is sponsored by the McLean County Right to Life Committee.

URBANA — “Blessed Are They. . .” is the theme for an ecumenical memorial prayer vigil planned for Thursday, Jan. 22, at 7:30 p.m. at First Wesleyan Church, 408 E. Illinois. The featured speaker will be Pastor Shannon Caughey of Twin City Bible Church in Urbana, and Jessica McMahon will give a testimony.

Holy Cross and St. Matthew in Champaign and St. Patrick in Urbana are among the churches sponsoring the prayer vigil.

GALESBURG — Christine Dennis and Jody Pitcher of the Women’s Care Center in Peoria will be the speakers for an interdenominational prayer service on Sunday, Jan. 25, at First Christian Church, 301 N. Broad St. Sponsored by Knox County Right to Life, it will begin at 6:30 p.m.

There is no charge to attend, but a free-will offering will be accepted to assist the Women’s Pregnancy Center in Galesburg.

Dennis, the president of the board of directors of the Peoria facility, which is located next door to an abortion clinic, will tell the history of the Women’s Care Center. Pitcher, director, will share testimonials from clients and talk about the impact the center is making in the lives of babies and their mothers and fathers.