5 St. Bede Academy students leave for a semester in China 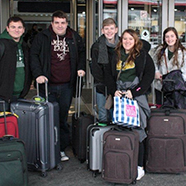 PERU — While many grade or high school students in central Illinois fought flu or snowy roads to return to their school after Christmas break, five students from St. Bede Academy had different challenges when they left for classes on Tuesday, Jan. 13.

Their classes this semester are in China.

“No doubt they are filled with a mixture of emotion,” said Father Ronald Margherio, OSB, academy chaplain of the participants in the first cross cultural education exchange of St. Bede students studying abroad.

Father Ronald presided at an early-morning blessing before departure for the four sophomores and one senior. They were accompanied by Dr. Ted Struck, superintendent of St. Bede, as they traveled from St. Bede to Chicago’s O’Hare International Airport to begin their journey to Kinglee High School in Zhengzhou, China.

The sophomore students are Adam Claggett, Riley Heise, Derrick Scarpaci and Lauren Silfies, while the senior is Brandon Glynn. They will live in dormitories on the Kinglee campus, attend school during the week, and then stay with host families over the weekend.

“All of us at St. Bede will continue to pray for them during this wonderful, life-changing opportunity” said Father Ronald.

ST. BEDE CURRICULUM IN CHINA
St. Bede Academy has had a formalized international boarding program since 2010 and this year 31 international students are boarding and attending classes at the Benedictine-run academy.

This semester, however, is the first that local students from St. Bede will be traveling abroad, thanks to an agreement reached between St. Bede and Kinglee High School in the spring of 2014 that paved the way for the integration of St. Bede curriculum at Kinglee.

“Curriculum for these students will be similar to what they had at St. Bede and taught in English,” said Michelle Mershon, St. Bede principal. But in China “they will have the opportunity to live, learn and take part in Chinese culture and also share their own American cultural experiences as St. Bede students,”
she added.

Mershon should know. Last fall, she and guidance counselor Theresa Bernabei travelled to China to meet with the administration at Kinglee to outline the integration of the St. Bede curriculum.

Zhengzhou is the capital and largest city of Henan province in north-central China. The city boasts a population of 10 million people. By comparison, the state of Illinois has a total population of about 13 million.

“Through this educational exchange the opportunities at St. Bede Academy have extended across the world,” said Struck. He noted the arrangement provides St. Bede students the opportunity to study in China with no additional cost to their tuition. Room and board are complimentary.

Struck and Abbot Philip Davey, OSB, visited Zhengzhou when the two schools first connected in early 2013. A business leader in Chicago introduced Wei-Chi Lee, owner and president of Kinglee High School, to St. Bede leadership. She determined that St. Bede was a “holy and safe place” to send some of her students. Six students from Kinglee attended St. Bede last school year.

When the agreement was reached last April, Struck said that while Catholic culture may not permeate the buildings in China as it does at St. Bede, religion classes will be taught by a newly hired teacher who has a master’s degree in theology.

Extracurricular activities will be different for the St. Bede students studying at Kinglee, where all sports are intramural. They can also expect to be in class for an extra hour a day.