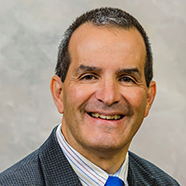 Photo Caption: Dr. Michael Cruz will officially begin his new duties on Jan. 26. He succeeds Keith Steffen, who served as president and CEO for 18 years.

Dr. Michael Cruz, who has been affiliated with OSF Saint Francis Medical Center in Peoria since 1987 and has held various leadership positions, has been selected to serve as president of OSF Saint Francis — the fourth largest medical center in Illinois and the flagship hospital of OSF Healthcare System.

He will succeed Keith Steffen, who is retiring after 34 years with OSF HealthCare, the last 18 as president and chief executive officer of OSF Saint Francis.

The announcement was made Dec. 17 by OSF HealthCare and the governing board of The Sisters of the Third Order of St. Francis.

Dr. Cruz will officially begin his new duties on Jan. 26, and will work with Steffen during the time of transition.

BEGAN IN EMERGENCY MEDICINE
“I am honored to accept this position and thank the Sisters, Mr. Keith Steffen, and ministry executives for entrusting me with this key leadership role at OSF Saint Francis,” said Dr. Cruz, who with his wife, Donna, and three children are members of Holy Family Parish in Peoria.

He started with OSF Saint Francis in 1987 as a resident in the emergency medicine program and was hired as an emergency medicine attending physician in 1990. Dr. Cruz was vice chairman of the department for a decade, and continues there in a limited role.

STEFFEN “EMBODIED MISSION”
Last June, Steffen, 66, announced his plans to retire at the end of 2014.

“Keith embodied the mission of our Sisters and worked hard to have that be part of every interaction the medical center staff had with patients and families,” said Kevin Schoeplein, chief executive officer of OSF HealthCare. “His positive impact on health care in Peoria and throughout central Illinois will be felt for decades to come. His work has helped preserve health and save lives for thousands and thousands of people.”

Steffen joined OSF Saint Francis as a vice president in 1980 and became president and CEO in 1996. During his tenure, he was involved in the introduction of numerous medical and health care innovations, and oversaw several major expansions, including:

— The Center for Health built in north Peoria in 2000
— Four primary care sites established in Morton, East Peoria, Washington, and north Peoria
— The $280 million Milestone Building project, completed in 2010, consolidating most of the Children’s Hospital services to one location, and
— The Jump Trading Simulation and Education Center, opened in 2013, a collaboration with the University of Illinois College of Medicine.

“Being a part of a faith-based organization has been an incredible experience,” said Steffen. “The Sisters are wonderful to work for and with. I have learned that, in spite of change in the health care landscape, the focus has to be on the mission that has remained unchanged for 137 years.”

Steffen, who served on the board of directors for about two dozen organizations, thanked the leadership team, medical staff, community advisory board and others for their support.

“It’s time to move to the next chapter of my life,” he added. Steffen and his wife, Cathy, plan to spend time with their four children and 14 grandchildren who reside in the Peoria area as well as Arizona.