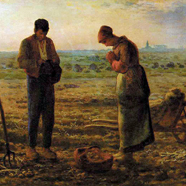 Photo Caption: “The Angelus” by Jean-Francois Millet hangs in the Musee d’Orsay, Paris.

“Peace on earth” is a phrase that will be repeated often in cards, carols and prayers during the Christmas Season. The Diocese of Peoria’s Council of Catholic Women would like to see that extended throughout the year, however, by daily use of an ancient Marian prayer.

At the organization’s biennial convention this fall, the DCCW board presented a resolution to members to promote the Angelus in the hope that “continued prayer for the intercession of Our Blessed Mother” would help to end “the persecution and genocide of Christians by terrorist groups,” especially in Iraq and Syria. The resolution passed unanimously.

“Our Holy Father has been appealing to the various nations and to Christians throughout the world to attempt to end the persecution somehow. The only thing we can do from here is to offer our prayers,” said Agnes Christman of Danville, the new DCCW president.

“Our Lady is the most powerful intercessor of all,” she told The Catholic Post. “Shouldn’t we be appealing to her?”

Msgr. Dale Wellman, longtime spiritual adviser for the DCCW, said that the Angelus also brings to mind the Incarnation of Jesus Christ and is a powerful reminder of the sanctity of life.

He added that they are counting on the prayer to “change the minds and hearts” of those who are attacking Christians in the Middle East, so that families might remain together in the area of the world where Christianity formed.

BUILDING SOLIDARITY
Tradition calls for the Angelus to be prayed at 6 a.m., noon and 6 p.m., and in many places church bells chime three times to call people to prayer. Christman said they aren’t asking people for that level of commitment.

“If they could pray at least once a day that would be solidarity in our diocese,” she explained. For example, children in Catholic schools could pray the Angelus at noon, while adults might choose another time during the day.

Because some people may not be familiar with the prayer, Christman said the DCCW would like to see the Angelus printed in parish bulletins. (The text also can be found on this page.)

The term, “Angelus,” comes from the first line of the prayer: “The Angel of the Lord declared unto Mary.”

The prayer is said to have its origins in the Liturgy of the Hours. One source notes that after evening prayer, monks would pray three Hail Marys and meditate on the Incarnation. Over time, a morning Angelus was added and in 1475 pope Sixtus IV granted an indulgence for praying the Angelus at midday.

Between 1566 and 1588, the Angelus appeared in the Little Office for the Blessed Virgin and the “Catholics’ Manual” of St. Peter Canisius. In 1742, Pope Benedict XIV asked that the Regina Coeli be prayed in place of the Angelus during the Easter Season.

Msgr. Wellman said it was Pope Paul VI who made the Angelus part of his weekly audience in St. Peter’s Square in Rome. Pope Francis continues the practice, praying it with pilgrims at his noon audience on Sundays.
Christman said hearing the Angelus prayed by people on a daily basis throughout the Diocese of Peoria would be a good first step, but she has bigger dreams.

“We hope to make it nationwide, if possible,” she told The Post. “If we had our whole National Council of Catholic Women ladies and their families and their schools and parishes — imagine the solidarity we would have in prayer.”

V. The Angel of the Lord declared unto Mary.
R. And she conceived of the Holy Spirit.

Hail Mary, full of grace,
the Lord is with Thee;
Blessed art thou among women,
and blessed is the fruit of thy womb, Jesus.
Holy Mary, Mother of God,
pray for us sinners,
now and at the hour of our death. Amen.

V. Behold the handmaid of the Lord.
R. Be it done unto me according to thy word.

V. And the Word was made flesh.
R. And dwelt among us.

V. Pray for us, O holy Mother of God.
R. That we may be made worthy of the promises of Christ.

Let us pray: Pour forth we beseech Thee, O Lord, Thy grace into our hearts, that we to whom the Incarnation of Christ, Thy Son, was made known by the message of an angel, may by His Passion and Cross be brought to the glory of His Resurrection. Through the same Christ Our Lord. Amen.