Benedictine monks continue to heed call to pray and work 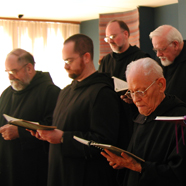 Photo Caption: The monks at St. Bede Abbey in Peru gather “in choir” to pray several times each day. The Rule of St. Benedict emphasizes prayer, work and holy reading.

EDITOR’S NOTE: This is the third in a monthly series featuring religious communities and other forms of consecrated life around the Diocese of Peoria. Pope Francis has called for a Year of Consecrated Life, which began on the First Sunday of Advent and will run through Feb. 2, 2016, the World Day of Consecrated Life.

Founded: In 1889 in Peru, Illinois, by St. Vincent Archabbey in Latrobe, Pennsylvania; became an independent abbey in 1910

Charism: Seeking God by listening carefully to his word and responding to it with obedience and generosity.

Apostolates: St. Bede Academy for high school students, hospitality, pastoral ministry and other forms of service that are compatible with community life.

PERU — Catholic education and pastoral ministry in the Illinois Valley are what the Benedictine monks at St. Bede Abbey are best known for, and they have been providing this care for 125 years.

Sponsoring St. Bede Academy in Peru, assisting at parishes in the Dioceses of Peoria and Joliet, and serving as chaplains at St. Margaret’s Health in Spring Valley are expressions of their primary purpose, however. What the monks seek is to find God “by listening carefully to his word throughout our lives and responding to it with obedience and generosity.”

It is a life marked by silence, humility, simplicity, prayerfulness, work, patience and perseverance. Living in community and committing themselves to remain at the monastery throughout their lives, the monks also strive for fraternal charity.

St. Benedict of Nursia developed the monastic way of life and wrote a Rule to help the monks grow in holiness and prayer and therefore contribute to the building up of the local and universal church. In it he emphasized prayer, work and reading.

Like Benedictines throughout the world, the monks at St. Bede gather “in choir” for prayer several times each day, starting early in the morning. In addition to the divine office, which is chanted, they celebrate Mass together and spend time in private prayer, reflection and holy reading.

“We seek to be always conscious of God’s presence and to stand before him as intercessors,” according to information provided by St. Bede Abbey.
“We pray expressly not only for ourselves, but for particular persons and intentions known to us or whose needs are recommended to us,” with a special emphasis on those who are suffering or in need, and for the faithful departed.

Because monasteries are not founded for a particular ministry, the monks work in a variety of ways to support themselves and to provide the means to be of help to others. At St. Bede that includes maintaining an apiary for honey, beeswax candles made by Father Patrick Fennell, OSB, and books for bakers written by Father Dominic Garramone, OSB, as well as the abbey’s high school ministry.

ROOTS IN PENNSYLVANIA
St. Bede Abbey was founded by Benedictines from St. Vincent Archabbey in Latrobe, Pennsylvania. They were sent first to St. Joseph Church in Chicago in June 1861 to minister to German immigrants, but by 1889 they were petitioning the motherhouse to establish a school in the Diocese of Peoria.

The Daniel Webster farm in Bureau County was purchased on May 15, 1889, and became the foundation for St. Bede College. Bishop John Lancaster Spalding was able to secure permission for a community of monks to settle in central Illinois and Pope Leo XII also sent his permission and blessing. The school opened in September 1891.

St. Bede was raised to the status of an independent abbey in 1910 and Father Vincent Huber, OSB, was elected the first abbot. He was blessed on June 29, 1910.

The current spiritual leader is Abbot Philip Davey, OSB,who was elected the eighth abbot on June 7, 2011. He was blessed on Sept. 14, 2011, in the abbey church by Bishop Daniel R. Jenky, CSC.

For more information on St. Bede Abbey and the monastic vocation, as well as profiles of the monks, visit stbedeabbey.org.