‘Retirement’ not in vocabulary of Sister Mary Lou Owens, OP 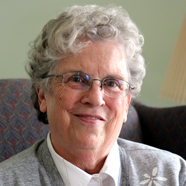 LINCOLN — While the Dominican Sisters of Springfield benefit from the Retirement Fund for Religious, the word retirement isn’t really in the community’s vocabulary.

“We continue in ministry until we feel we can no longer do it,” she told The Catholic Post.

The collection for the Retirement Fund for Religious will be accepted in parishes around the Diocese of Peoria next weekend, Dec. 13-14. (See letter from Bishop Jenky on page 2.) Last year, people in central Illinois contributed $164,938 toward the appeal, which totaled $28.4 million nationally.

The Dominican Sisters of Springfield have 216 members, according to Sister Mary Lou. Some are being cared for at Regina Coeli, the health care facility at the motherhouse, but that doesn’t mean they aren’t contributing anything to community life, she said.

“We don’t call it an infirmary because we feel like they care for us through prayer and we care for them — it’s community,” she explained.

TEACHER, PRINCIPAL, DRE, MORE
Sister Mary Lou, who celebrated her 50th anniversary of consecrated life in 2013, would certainly be eligible for retirement if she worked in the corporate world. But the wisdom she’s gained in life makes it possible for her to do the ministry she’s been called to in Logan County, she said.

Now in her eighth year, Sister Mary Lou is involved in adult faith formation, the Rite of Christian Initiation of Adults, spiritual direction and “anything that needs to be done. Right now we’re planning our Lenten programs.”
Her long ministry as a Springfield Dominican has included serving as a teacher, principal or director of religious education in Springfield, Decatur, Jerseyville, Carlinville, Elgin and Chicago. She also did formation work for her community from 1998 to 2004.

Not only do the Dominicans continue in ministry as long as possible, but they do it happily, she said.

“It’s not like, ‘I have to do this,'” Sister Mary Lou said. “And there’s always that element of prayer. I think in these days of fear we can bring hope to people. I think the greatest ministry I do here is listen.”

In the Diocese of Peoria the Springfield Dominicans are involved in parish ministry at St. Malachy Parish in Rantoul, too.

Sister Mary Lou said you will also find them working in health care, literacy centers in Aurora and Chicago, the Marriage Tribunal for the Archdiocese of Chicago, Native American ministry in South Dakota, campus ministry in Columbia, Missouri, parish administration, and hospital chaplaincies. The Dominicans also have Sisters in South America.

She is very clear that the work she does isn’t her work.

“I didn’t make a map and say, ‘This is where life is going to take me,'” Sister Mary Lou said. God is in control and “God is good in all of this.”

For more information on the Retirement Fund for Religious, visit retiredreligious.org.