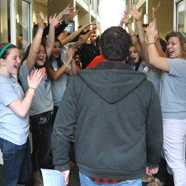 Photo Caption: The dozens who were trained as “Teen Missionary Disciples” the previous night were given duties at the Youth Rally, including enthusiastically welcoming attendees as they arrived.

Maria Nation, an active Catholic teen from Aledo, admitted to having some reservations when her parish youth group leader invited her to be part of an evening on the theme “Teen Missionary Disciples” the night before the Diocese of Peoria Youth Rally.

“I didn’t know if I was qualified,” said the high school senior, despite having served on several Teens Encounter Christ teams for the diocese’s Northwest region.

Maria is happy she didn’t give into her doubts and decided to take part in the “amazing opportunity.”

In fact, Maria and the four dozen other participants in the pre-rally evening would play key roles in easing any anxieties felt by the hundreds attending the Nov. 22 youth rally in Peoria. From helping with set-up at the Spalding Pastoral Center, to offering a boisterous early morning welcome at the front door, to giving directions, leading prayers, and having roles in the closing Mass — the teens with the gray “Teen Missionary Disciples” t-shirts seemed to be everywhere.

The teen leaders, who were recommended for the overnight pre-rally by their pastors or youth group leaders, brought energy to the rally despite being up late the evening before. After hearing evening talks by rally keynote speakers Chris Stefanick and Megan Mastroianni, the teens had late night adoration, attended a Mass that started at 11 p.m., and continued to pray and talk into the wee hours.

“We prayed for two hours. It was great,” said Nicholas Brose, who is on the Bishop’s Leadership Committee at Peoria Notre Dame.

Caroline Friedmann, a senior at Bloomington Central Catholic, was quick to volunteer for the pre-rally night.

“I love Jesus and I really like meeting new people,” she told The Catholic Post. Friedmann said Mastroianni’s insistence during the pre-rally evening that “you have to be close to God before you can bring others close to him” would help guide her own faith life and witness.

Ryan Hartness, also from Central Catholic, shared a similar insight into being a disciple.

“It’s not just going out to people,” he said. “It’s first accepting Christ’s love and then letting it show” to others, said Hartness.

Abby Springsteen, a junior at Rockridge High School and a member of St. Patrick Parish, Andalusia, can’t wait till next year after bonding with new friends in faith.

“I’ve been talking with a bunch of people and they’re so friendly,” she said. “It makes me want to keep in touch with them and come back.”