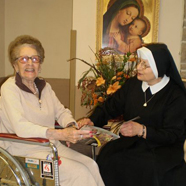 Photo Caption: One of the ways the Daughters of St. Francis of Assisi live out their charism is caring for the residents at St. Joseph Nursing Home in Lacon.

EDITOR’S NOTE: This is the second in a monthly series featuring religious communities and other forms of consecrated life around the Diocese of Peoria. Pope Francis has called for a special year dedicated to consecrated life, which will begin the First Sunday of Advent, Nov. 30, and run through Feb. 2, 2016, the World Day of Consecrated Life.

It wasn’t because Anna Bruner didn’t know what to do with her life, but because she did that she devoted herself to God by caring for the poorest of the poor on the streets of Budapest, Hungary.

On the Feast of the Sacred Heart in June 1894, she started a community of
Sisters who would follow the spirit of St. Francis by living in poverty and self-denial in the service of these very same people.

After 120 years, Mother Anna’s vision remains the focus of the Congregation of the Daughters of St. Francis of Assisi. They continue to give honor and glory to God and, like St. Francis, “find the suffering Christ as we serve God in the poor, sick and abandoned.”

Sister M. Loretta Matas, DSF, superior of the congregation’s American Region, noted that St. Francis asked the Lord, “What do you want me to do?” and said the answer was to live the Gospel without hesitation.
“As his spiritual daughters, we desire to bring the Gospel of Life into the world,” she said. “By God’s grace, following the way of Jesus’ earthly life, we abandon ourselves to God through the Evangelical Counsels of vows of chastity, poverty and obedience.”

With a spiritual life rooted in the Gospel, “we pray for the wisdom to respond to the demands and manifestations of God’s love,” Sister Loretta said. “Love requires a dialogue; it is not only a reach, but also a response of love.”

RESPONDING IN FAITH
That response takes many different forms in the international congregation, which carries on Mother Anna’s legacy of caring in Slovakia, the Ukraine, Hungary, Romania and Albania, as well as the United States.
In fact, their presence here is the response to a request for help from Father Stephen Kassovic, the community’s chaplain in Bratislava. He was teaching at St. Bede Academy and ministering at St. Roch in LaSalle when he arranged to have 20 Sisters come to central Illinois.

In the end, only 15 Sisters were allowed to leave communist Czechoslovakia. After serving at St. Bede for five years, the community established St. Joseph Nursing Home in Lacon.

Today the Franciscans strive to provide the best care possible while reminding the residents “they are our family and we are here for them,” Sister Loretta said.

In addition, one of the Sisters teaches religious education classes at Immaculate Conception Church in Lacon.

The American Region has also had a mission to Mercy St. Francis Hospital in Mountain View, Missouri, for more than 50 years. They went at the invitation of the people, who needed assistance after the hospital had closed.

In Bratislava, members of the community are involved in teaching, hospice and home care. In Albania, they are in parish ministry.

“Our congregation does what is needed,” Sister Loretta said, but she cautioned against confusing what they do with who they are.

“If the Holy Father dedicated this year to this, he meant for us to do something,” she said. “This is to wake up the world so people understand more about consecrated life and why they should think about it.”

Congregation of theDaughters of St. Francis of Assisi
Lacon

Founded: On the Feast of the Sacred Heart of Jesus in June 1894, in Budapest, Hungary
Foundress: Mother Anna Brunner
General Superior: Mother M. Gerarda Farska, DSF
Regional Superior: Sister M. Loretta Matas, DSF
Members: 200 total; 12 in the United States
Charism: Caring for the sick
Apostolate: Service to our neighbor for the love of Christ, such as at St. Joseph Nursing Home of Lacon. “We want to bring the good tidings of God’s goodness and mercy to men.”

“Let us rejoice and help one another that we will be worthy of God’s grace.”
Mother Anna Brunner
Foundress