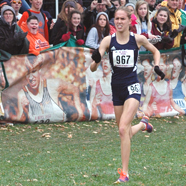 Photo Caption: Maryjeanne Gilbert of Peoria Notre Dame setting a Class 2A record time of 16:12 in the Illinois High School Association state finals on Nov. 8 at Detweiller Park in Peoria.

Maryjeanne Gilbert says she often prays or reflects as she runs, and a training regimen that includes running six to eight miles a day affords the Peoria Notre Dame junior plenty of time for both.

In spiritual terms, then, her record-breaking state championship cross country run on Nov. 8 was a private retreat.

Gilbert started fast and separated herself from the pack early on the three-mile course at Detweiller Park in Peoria. By the time she finished in a Class 2A state record time of 16:12, Gilbert was a full minute ahead of the second-place finisher.

It was the second fastest time ever run by a girl on the course, which has hosted the cross country finals for decades.

The solitude quickly ended when Gilbert crossed the finish line and was swarmed by friends, family, and members of the press.

“My best memory will be hearing so many people cheering me on during the race, and being greeted by so many supporters after the race,” Gilbert, 17, told The Catholic Post. “It meant a lot to me to know that so many people want the best for me.”

Maryjeanne Gilbert is an elite runner because, inspired by her Catholic faith, she pushes to be and do her best every day.

SACRIFICE, PERSEVERANCE
“When we seek to do our best, the love and truth of Christ is a great guiding light,” said Gilbert, the daughter of Dr. George and Beth Gilbert and a member of St. Thomas the Apostle Parish, Peoria Heights, who has been running competitively since joining the St. Thomas track team in fifth grade.

“Challenging the status quo is something I like to do. Christ’s life is inspiring, and I want to live for Him.”

To that end, Gilbert embodies virtues that link both faith and distance running, including sacrifice, discipline, perseverance, courage, and endurance.

She often awakens early to get her running and strength training in before school or the day’s other activities — including while on a Peoria Notre Dame mission trip to Miami last June. To ensure that she wasn’t running alone on the streets of Miami, mission trip participants including members of the football team and Father Adam Stimpson, school chaplain, would accompany her.

There are other sacrifices. “I have pretty much given up desserts,” she said, in favor of a diet steeped in fruits, grains, proteins and vegetables. Plus, “I have some wonderful friends with whom I’d like to spend more time.”

“Maryjeanne strives to be successful at everything she does and still can be a very cheerful person along the way,” said Dan Gray, coach of the Peoria Notre Dame girls cross country team that finished 10th at state.

“Her success is based on her own goals and not relative to her opposition,” Gray continued. “She is very happy for other kids to be able to accomplish their own goals just as much as she is happy for accomplishing her goals.”
Citing her work ethic and “incredible will to win,” Coach Gray attributed Gilbert’s success to another major factor.

“It is obvious that she has a God-given talent to be the runner and the person she is,” said Gray. In fact, Gilbert comes from a family of runners — her four siblings took part in track and/or cross country, and her father was the Peoria City Champ in the half-mile in 1978. From her mother, she learned hard work and achieving goals.

Next up for Gilbert is the Foot Locker Midwest Regional Meet in Kenosha, Wis., on Nov. 29, where she will test herself against the region’s best runners. She will then continue training through the winter in preparation for track season, where she is the defending state champion in the 3200 meters.

For the long-term, “the sky is the limit,” according to her coach. Gilbert said she hopes to run in college “and maybe beyond that,” but still has goals for her high school career.

“I would really like to help our Peoria Notre Dame cross country team get back to state next year, where maybe I can break the course record of 16:02!”