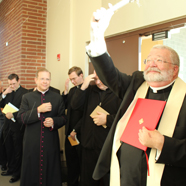 While their days are often filled to overflowing with responsibilities, more than 100 priests from around the Diocese of Peoria were reminded to save time to celebrate what’s “right with the world” as they came together for Priest Assembly Days in Peoria.

The annual gathering, held at the Spalding Pastoral Center Oct. 28-29, provided an opportunity for them to pray together, reconnect over meals, and learn about new ways to collaborate, communicate and evangelize.

They also remembered one of their own, Msgr. Joseph Zube, as Bishop Daniel R. Jenky, CSC, blessed the new connecting passage between the Spalding Renewal Center and the Spalding Conference Center. The Zube Corridor is the final piece of the Spalding Pastoral Center and was made possible with a bequest from Msgr. Zube, who died in 2011.

Bishop Jenky praised him as “a faithful priest of our diocese and a hard-working member of our curia” and asked the Lord to bless the corridor so that “all who pass through here know the presence of Christ, experience the joy of his friendship, and grow in his love.”

In Msgr. Zube’s honor, the priests sang the “Salve Regina” before returning to their meeting.

Before the gathering was over, Bishop Jenky also expressed his gratitude to all of them.

“I am aware of how much you do,” he told the priests. “I give thanks for all of you.”

OPPORTUNITIES FOR COLLABORATION
In the first session, the clergy learned more about the Resource Renewal Project, a stewardship initiative of Coleman Group Management Consulting of Chicago. The firm has been working with the schools of the Diocese of Peoria for about a year to discuss “opportunities for collaboration and support.”

President and CEO Patrick Coleman said 31 locations are using at least one of the project’s 19 programs, including an energy program and the Staples Advantage program that are designed to save the schools and parishes money.

He also discussed GiveCentral (givecentral.com), which promotes secure online giving. Not only can the program increase stewardship in the parish by 30 percent but it also enhances communication with parishioners.
Another benefit is that it simplifies data management and accounting for the staff.

“If evangelization is about going where the people are, we have to communicate with them in the way they want to be communicated with,” he said.

He estimated that giving could increase by as much as $10 million in the Diocese of Peoria by using the program, which emphasizes constant communication, making giving easier and providing online resources to do it.

Encouraging them to “believe and then you’ll see,” Father Co showed a clip from the video “Celebrating What’s Right with the World,” which invites the viewer to see how changing perspective can bring greater results than we might have thought possible.

Father Klamut asked the priests to look at their own views about making disciples.

“If we’re meant to live, move and minister in persona Christi . . . we are challenged to make disciples,” he said. “Jesus spent a great deal of time investing in small groups of people, forming them into disciple makers.”

Rather than occupying the seats of power, Jesus focused on relationships with a few people and “through the few he reaches the many.”

Father Klamut urged them to invite the laity into this, building them up through word and sacrament, and then helping them to use the reach they have in the marketplace.

In addition to evangelization, the clergy had an opportunity to revisit Catholic social teaching with the help of David O’Brien, who is on the faculty of St. Leo University in Florida. He has run JustFaith groups and his remarks included how to initiate people in the rich heritage of the church’s social teaching.

They also heard about confronting addiction and the spiritual healing that is available through the 12 Step Program from Terry Sullivan of Guest House.