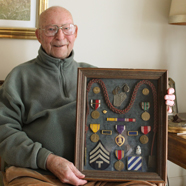 Photo Caption: Chick Bruns, 95, a member of Holy Cross Parish, Champaign, with a display of honors earned during his U.S. Army service, including the Purple Heart and the French Croix de Guerre.

CHAMPAIGN — Many people who fought in World War II didn’t want to talk about their experiences when they returned and still don’t. Charles “Chick” Bruns isn’t one of them.

“It was so much easier to talk about it than to hold it all back,” the 95-year-old veteran said of his service in Africa and Europe with the 7th Army, 3rd Division, 10th Combat Engineer Battalion.

“I grew up with all the stories,” his son, John Bruns of Cissna Park, told The Catholic Post. “Dad would tell me and my friends about the war. I can’t imagine what he went through.”

In an effort to give people a better understanding and honor his father, John has established 70yearsago.com, a website devoted to the World War II Diary of Chick Bruns. He started it after Chick was included in an Honor Flight to Washington, D.C., in 2012 and has posted an entry from his father’s diary or letters every day since.

Now posting from November 1944, John intends to continue until next summer. That will mark the 70th anniversary of Chick’s return to central Illinois in 1945.

“I hope I live that long — I want to see what happens,” Chick said with a laugh, admitting there are many things he reads on the website that he no longer remembers.

On some days there is little to post because he didn’t write much. He begs readers to “look between the lines. There was more action going on than I wrote in the diary.”

FAITH NEVER WAVERED
Chick was born on April 27, 1919, in Villa Grove. Everyone called him “Chickie” because of his curly yellow hair and the nickname stuck.

His early years were spent in Danville, but he finished his school days at Holy Cross in Champaign, where he received his first Communion and was confirmed. He often served at the altar and remembers running afoul of the principal, Mother Petronella, when he and a friend were caught drinking the wine after Mass.

While Chick and his wife, Rita Marie, were members of St. Mary Parish in Champaign and St. Patrick in Urbana for a time, he has been an usher at Holy Cross for more than 65 years. He can usually be found helping at the 10 a.m. Mass on Sunday and still prefers to go to the Children’s Mass at 4 p.m. on Christmas Eve.

That commitment to his faith never wavered during the war, he said.

“I served when I was in the service, too,” Chick recalled. “Any chance I had I went to Mass. When we were about to go into battle the priest would come in.”

The soldiers were usually welcomed at the churches in the little towns they liberated and he said he could follow everything but the homilies.
In that situation “you’ve got to pray a lot,” Chick said simply.

He was part of five invasions — Africa, Sicily, Salerno, Anzio and Southern France. His engineering battalion picked up and placed mine fields, built bridges and repaired roads, sometimes working ahead of the infantry, sometimes behind. “Nicked” a few times, he was wounded at Anzio when German artillery hit a nearby truck and it rolled over them. Three people were killed.

“He didn’t want his mom and dad to know he was hurt. He was only in the hospital a couple days and wanted to catch up with his outfit, so he left the hospital,” John said. While he was reported missing in action for a time, everything was eventually straightened out.

“I had to explain to them what happened. Every letter I wrote home there was never any danger,” Chick explained.

Among the medals he received are the Purple Heart and the French Croix de Guerre.

A TIME TO REMEMBER
John and his brother Chuck Bruns of Champaign accompanied their father on his Honor Flight to the nation’s capital in 2012. John becomes emotional when he talks about how people shook hands with the veterans and recognized them for their service.

“When Dad started talking, people leaned in to listen,” he said.

“They were not selfish in what they did to protect this country,” John told The Post. “They put their country’s well-being ahead of their own well-being.”

Chick said he hoped that on Veterans Day people would take time to remember what happened during World War II and the sacrifices people made — on the battlefield and at home.

He has been invited to a Veterans Day program at Holy Cross School and would like to go. He has visited the children over the years to share stories and memorabilia.

His son made a request on behalf of everyone who has served the United States, however.

“Make sure you reach out and shake hands with them as they walk by,” John said. “On Veterans Day if you see someone with a hat or a jacket with an emblem on it or you’re at and event stick out your hand and say, ‘Thanks.'”