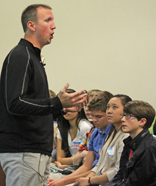 Leaders can’t always control the circumstances in which they find themselves. What they can control is their attitude and effort and that’s what former NFL quarterback Chris Greisen encouraged students to look at during the recent Catholic High School Leadership Day.

The event brought nearly 200 students, chaplains and chaperones from the seven Catholic high schools around central Illinois to the Spalding Pastoral Center in Peoria. In addition to Greisen’s talks, the day included Mass at St. Mary’s Cathedral with Bishop Daniel R. Jenky, CSC, who recognized their leadership and commissioned them for service in their schools.

Greisen, who is in his second year as a math and theology teacher at Notre Dame de la Baie Academy in Green Bay, Wisconsin, said our faith teaches us that doing the right thing in the right way bears good fruit. That paid off in his career, which included playing for 11 different teams in five leagues over 14 years.

Greisen was drafted by the Arizona Cardinals, but was cut after three years. A good year with NFL Europe followed, but when he returned to the United States no NFL team would give him a chance. He ended up playing for the Arena Football League, including Arena Football 2.

“I was pretty arrogant. I was real arrogant. I thought I was the best,” Greisen told the students. “The good Lord was humbling me. Now I was playing at the lowest level of football, but I guess he thought that wasn’t humble enough. . . . I didn’t even start the first game.”

Greisen knew something had to change.

“There was something inside of me that said, ‘If I allow that anger to stay inside of me I’m not going to be able to play,'” he explained. “I ended up changing my attitude: ‘OK, I’m still on the team.'”

WHAT IS WITNESS SAYING?
Another attitude adjustment was needed after Greisen was called back up to the top tier of Arena Football with the promise that he’d be the starting quarterback, but then got bumped to the second spot. He surprised everyone by congratulating the guy who got the job.

“In football, in any team sport, you have to play together,” Greisen said. “Instead of being upset every practice that I wasn’t the starter, I changed my attitude. I said, ‘I am blessed to even have a job, to get paid to play professional football.'”

As it turns out, Greisen would be recruited by someone who was watching as he congratulated the starting quarterback after a touchdown, held the ball for the kicker, thanked the linemen and then ran back to the bench with a smile on his face. “I saw that and it told me who you were,” the official told him.

“As you go back to your school, you never know who’s looking at you and who’s watching you,” he told the student leaders. “Your witness in doing the right thing at the right time can make a difference and you’ll never know about it.”

Greisen gave them five tips for developing a good attitude:

— Be around positive people. “I was watching how positive you were with one another, joking and having fun. Awesome stuff. I can’t tell you how cool that is to see,” he said.

— Read good books. The first book on the list should be the Bible, according to Greisen.

— Pray. He said he prayed the Serenity Prayer often during his career.

— Receive the Eucharist. “Talk about a way to strengthen your ability to give yourself courage and the ability to say no to temptation and do the right thing! Receive Jesus in the Eucharist,” he said.

A good coach once reminded him that whenever he was on the field or went into the weight room he would either get better or worse. “You never stay the same.”

The same is true with our spiritual life, Greisen said.

“You’re either getting closer to God or you’re getting farther away,” he said. “Which way are you going?”