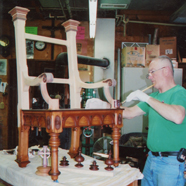 Photo Caption: Tom Weiss, who made the altars consecrated this month at Sts. Peter and Paul Church in Leonore, works on the presider’s chair that now graces the chapel at Central Catholic High School in Bloomington.

OTTAWA — Tom Weiss admits that when he went to St. Columba Church for Mass as a kid he often paid as much attention to his surroundings as he did to what was taking place at the altar.

“It was so big and such a graceful building. The windows — everything about it was awe inspiring,” he told The Catholic Post. “And the music! The pageantry was unbelievable.”

The eye he developed in the pews of St. Columba Church is helping to inspire others now through the liturgical furnishings Weiss makes for churches around central Illinois. Among them are the high altar and altar of sacrifice he created for Sts. Peter and Paul Church in Leonore, which were consecrated recently by Bishop Daniel R. Jenky, CSC. (See related story.)

A member of the Leonore parish, Weiss served as a lector for the Mass on Oct. 11. Then he watched from the front row as Bishop Jenky poured the sacred Chrism on the altars and worked the fragrant oil into the wood that Weiss had also handled with loving care.

In addition to the altars, Weiss made the Nativity that is used at Sts. Peter and Paul. He made another for St. Mary in Peru.

The students at Central Catholic High School in Bloomington gather around one of Weiss’ altars for Mass and stand at one of his ambos to proclaim the readings, while the presider sits in the chair he made. He has been commissioned to add a credence table to the liturgical furnishings in the chapel.

The Dominican Sisters of Mary, Mother of the Eucharist are the most recent to benefit from his skill as a woodworker. Weiss made the altar for their convent chapel and continues to work on the mensa (flat surface) and reredos (back part) of the high altar.

“I like working in churches. It’s an expression of my own faith,” Weiss explained. “It’s my home.”

MORE THAN A JOB
Not only did the Catholic community in Ottawa feed his vocation, but it also gave him a way to pursue it.

Weiss attended St. Columba School and remembers going over to Marquette High School and polishing the refectory floors for the Sisters of Mercy who staffed it.

“The cooks were always cooking supper and it smelled good,” he said. “You go early in the morning and the nuns would be in the chapel on the third floor singing — you could hear it all over the school.”

Weiss graduated from Marquette in 1965 and then went into the Navy, serving in the Vietnam War for four years. When he returned home he was asked to put up some new lights at his alma mater and discovered that when the old part of the school was torn down the machinery was put in storage in the annex.

Msgr. James Swaner, who was assigned to the school at the time, asked Weiss if he wanted to buy it. That machinery became the foundation for his shop, Weiss Mill and Woodcraft, which is still based in the Ottawa area.

He doesn’t have a lot of employees, preferring instead to work with apprentices.

“It’s the only way you can teach this. It’s not a job, it more of a vocation,” Weiss said.

Even so, he has a partner.

Weiss married his wife, Linda, at St. Columba in 1971 and their family now includes three sons — “all raised in the shop at my knee” — and one daughter. The couple has nine grandchildren.

What first drew him to his life’s work continues to guide him.

“Beauty always inspired me and Catholic churches are always full of beauty. That’s inspiring,” Weiss said. “Beauty should not be regarded as a distraction. Jesus is the author of all beauty, so we should glorify him by doing the best thing we can do for him.”