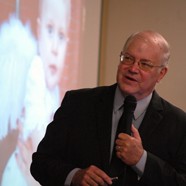 Photo Caption: Brian Clowes, director of education and research for Human Life International, told those at the Respect Life Dinner “you are part of something much, much bigger than you might expect.”

On a day when Life Chains linked pro-lifers standing side-by-side in communities around the Diocese of Peoria, the keynote speaker at the 33rd annual Respect Life Dinner said those defending the sanctity of human life locally are actually “intimately connected” to others around the world.

“The pro-life movement is not just here in the United States,” said Brian Clowes, director of education and research for Human Life International. “You are part of something, much, much bigger than you might expect. All over the world there are pro-life people, and almost all of them look to the United States for leadership.”

Clowes should know. For 20 years, he has traveled around the globe training and equipping grassroots pro-life efforts through Human Life International, an organization founded by Father Paul Marx, OSB, in 1972 and now active in 88 countries.

About 200 people attended the Oct. 5 dinner, which benefits the Family Resources Center in Peoria. This year’s event took place at the Spalding Pastoral Center, located across Monroe Street from the center’s new location.

Absent for the first time for health reasons was Jan Smith, founder and longtime director of the Family Resources Center.

“We know how much the cause of life and concern for the family means to her and to all of us,” said Father Bill Miller, IC, chair of the Diocese of Peoria’s Respect Life Board, during his report to the group. Smith, who is recovering from a recent surgery, was also remembered in prayer by Father Tom Mizeur, pastor of Immaculate Conception Parish in Lacon and St. John XXIII Parish in Henry, who gave the invocation.

While not present, Smith’s words reached the audience. A report written by Jan and her husband Pete was read by Eileen Wikoff.

“Education remains the key to truth, and that is the mission of the Family Resources Center — to reach our families, young people and the world with the truth of God’s word,” the Smiths wrote. Volunteers are needed as the center expands it programs, they said.

Father Miller noted the dinner coincided with the opening of the church’s Synod of Bishops of matters relating to family life. He urged all to follow and pray for the synod, saying “the attack on marriage and family life is what makes the culture of death so prevalent.”

Clowes’ keynote presentation linked his own family life — he and his wife Kathleen have seven children and just celebrated their 40th wedding anniversary — with the efforts of Human Life International, which he called “the world’s largest pro-life organization nobody’s ever heard of.”

After a travelogue-like talk showing images from the various countries he and his family have visited in the cause, Clowes ended by explaining the breadth of research captured on DVD by his organization’s “Facts of Life” project.

“We’ve put everything on this DVD you’d ever need for pro-life or theological use,” he said. The DVD is necessary, he said, because so much of the world remains without reliable Internet access.

Clowes was introduced by Annie Carroll and Jacob Hopper, co-presidents of Peoria Notre Dame Teens for Life. Also speaking at the event, which was attended by several political figures — including Bobby Schilling, candidate for the U.S. House of Representatives, and Peoria Major Jim Ardis — were Dan Smith and Karen Guth, who provided updates on the Life Chain and 40 Days for Life efforts.

EDITOR’S NOTE: Those wishing to send a messages of prayer and encouragement to Jan Smith are invited to do so in care of the Family Resources Center, 415 N.E. Monroe St., Peoria, IL 61603.