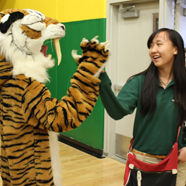 CHAMPAIGN — Academic excellence was a promise made to parents and the community when The High School of Saint Thomas More opened its doors in August 2000, and principal Ryan Bustle has the test scores and graduation rates to show that they’ve kept that promise. On Sept. 30, they were rewarded for that hard work with recognition as a 2014 National Blue Ribbon School.

The Champaign school is the fourth diocesan school to be honored by the U.S. Department of Education in the last five years and the first of the diocese’s seven high schools to receive the designation. St. Vincent de Paul School in Peoria was named a National Blue Ribbon School in 2010, with Epiphany School in Normal and St. Patrick School in Washington following suit in 2011 and 2012, respectively.

Bustle said when he and assistant principal Tracy Neitzel started collecting data for the rigorous application process last fall, it was eye-opening.

“When you have the information in front of you it makes you take a step back and think,” he told The Catholic Post.

“Sometimes myself and our teachers tend to forget about how successful we can be at times and focus on things that need to be done instead of the things that our teachers and our students and our community are doing,” he explained. “When you’ve got the proof on paper here in front of you it humbles you very quickly.”

IT TAKES A COMMUNITY
Saint Thomas More was recognized in the category of “Exemplary High Performing Schools” and that is a high honor, according to Dr. Sharon Weiss, superintendent of Catholic schools for the Diocese of Peoria.

“It is a wonderful reflection of the strong curriculum and instruction that exists in that school and the leadership that is needed to move that forward — making sure you have quality teachers, quality staff, committed families because that’s huge,” she said. “I never want to discount the power of all of the school community and how they all share in this award.”

“Anybody that’s walked into our building and supported Catholic education and supported STM is deserving of a piece of this,” he said.

Father Joe Hogan, pastor of St. Patrick in Urbana and St. Mary in Champaign and president of Saint Thomas More’s Pastors’ Board, noted that the school exists because of the time, effort and prayer of the Catholic community. That includes Bishop John J. Myers (now archbishop of Newark, New Jersey), who was present in the beginning, and Bishop Daniel R. Jenky, CSC.

“I think this community really does try to do a wonderful job with education. So to me it goes beyond Saint Thomas More to even the Champaign-Urbana community — trying to educate our children and our children’s children,” he said.

Father Hogan added that he loves that the chapel is at the center of the school — physically and spiritually. Father Matthew Hoelscher, STM chaplain, said it’s that faith dimension that makes the Blue Ribbon designation an even greater achievement.

Msgr. Albert Hallin, now a senior priest of the Diocese of Peoria, was charged with getting The High School of Saint Thomas started. In doing so, he said, he made a “13 year promise” to parents that from grade school to high school to college their children would always be ready to take the next step in their Catholic education.