Pray, then act urges speaker at 40 Days for Life kickoff 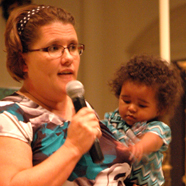 Photo Caption: Connie McEldowney, founder of Rustic Hope Ministry and keynote speaker at the 40 Days for Life kickoff in Peoria, holds JayLynn, age 8 months, whom she is raising at the request of her birthmother.

When Connie McEldowney spent her first hour outside an abortion clinic as part of the 40 Days for Life campaign, she had her rosary in hand but was so shocked by what she saw that when her was over “it dawned on me I had not said one prayer.”

The 15 women who entered the Dayton, Ohio facility that day “didn’t look like what I thought,” said McEldowney, guest speaker at the Sept. 21 kickoff for the 40 Days for Life now under way in Peoria. Noting that she was there on a day abortions were being performed, McEldowney said she saw business women as well as “young girls with friends who looked like they were walking into McDonalds.”

She might not have prayed that hour, but she has rarely stopped since.

“When I got home I prayed like I never had before, and sobbed,” she told more than 100 people attending the rally, held for the first time at St. Mary’s Cathedral. “I felt sick. I couldn’t stop it. There was nothing I could do.”

Her prayer led her to the conviction that there was a way to act.

“I think we’re supposed to open our house up and take people in,” McEldowney — a stay-at-home mother of five in rural Shelby County, Ohio — recalled telling her husband. And that’s just what they’ve done as founders of Rustic Hope, a ministry that offers free support to pregnant teens before, during and after delivery.

“What young girls need isn’t money,” she told the group. “What they need is love.”

McEldowney challenged those taking part in the 40 Days for Life campaign — a period of prayer, fasting, and vigils outside abortion facilities that opened Sept. 24 and runs through Nov. 2 in Peoria, Champaign, and the Quad Cities as well as cities around the nation — to “pray with an open heart.”

“They’re all God’s children,” said McEldowney of those seeking an abortion. “We all make mistakes. It’s not my job to judge. It’s my job to love them through it.”

Other speakers at the rally shared similar calls to action.

“Each person needs to do their part,” said Charlie Dean II, pastor of Imago Dei Church. “Faced with the presence of evil, what is God asking of me?”
Karen Guth, director of 40 Days in Peoria, said “the most important thing to do on that sidewalk is to pray and ask God to end this scourge in our city and in our world. I pray the Lord will be pleased with our efforts and that hearts will be touched by this campaign.”

Other speakers at the rally included Kate Smart and her adopted daughter, Enanu, as well as Hannah Miller of East Peoria, who edited and produced a new pro-life film called “Mitosis” which was premiered at the rally. The 15-minute film, which creatively and sensitively depicts how different our society might look had just one person not been aborted, brought tears to many at the rally. It will be released on YouTube in the coming weeks and promoted through social media.

Father Martin Mwongyera led the group in a closing prayer.