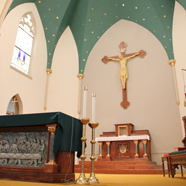 Photo Caption: Bishop Jenky will consecrate the new altars of St. Patrick Church in Arlington during a Mass celebrating the parish sesquicentennial at 10:30 a.m. on Sunday, Sept. 21.

ARLINGTON — A yearlong celebration of the 150th anniversary of St. Patrick Parish here will culminate with a Mass of Thanksgiving to be offered by Bishop Daniel R. Jenky, CSC, at 10:30 a.m. on Sunday, Sept. 21.

During the Mass, Bishop Jenky will consecrate new altars at St. Patrick Church, part of a restoration and redecorating project at the 93-year-old edifice undertaken as the parish approached its sesquicentennial year. The altars were designed and built by Heritage Restoration and Design of Peoria.

The celebration will continue with a catered dinner immediately following the Mass in Bishop Franz Hall. Dinner reservations are $15 for both adults and children, and can be made by contacting the parish office at (815) 894-2006. Seating is limited to 200 and reservations were nearing capacity as The Catholic Post went to press on Tuesday.

“This is an exciting time for the people of Arlington, LaMoille, Van Orin and neighboring communities who comprise the parish family,” wrote Father Patrick Fixsen, pastor, in a recent letter to present and former St. Patrick parishioners as well as patrons of Calvary Cemetery detailing the sesquicentennial celebration. “It is our desire to include everyone and to fill the church on Sept. 21.”

Guests of honor will include a color guard of Fourth Degree Knights of Columbus members from Starved Rock Council No. 191, along with representatives from St. Bede Abbey, Peru, St. Mary Monastery in Rock Island, and family members of former pastors who served the parish.

KEEPSAKES AVAILABLE
A steering committee planning the celebration of 150 years of faith has taken steps to ensure memories of the event will last well into the parish’s next chapter. Among a series of mementos and keepsakes being offered for purchase are:

— Sesquicentennial edition Christmas cards as well as boxed cards of the church’s renowned stained glass windows. The windows have been cherished through the generations and drew national attention when they were displayed in the Smithsonian and later at Marshall Field & Co. in Chicago as representing some of the finest examples of both Irish and Austrian stained-glass art.

— A video recording is being made of the sesquicentennial Mass, and

— a souvenir handbook, containing the 150-year parish history and photos from the Sept. 21 celebration, will be available by early December.

All will serve to mark the joyous occasion that is “an important milestone in our spiritual lives and the life of this community,” said Father Fixsen.

HISTORY HIGHLIGHTS
The parish has come a long way since Aug. 4, 1863, when property was secured “for the consideration of $1” to build the community’s first Catholic church. The first Mass was celebrated at the church on Easter Sunday 1864. St. Patrick was guided by priests from Mendota until 1876 when it became independent. Father Michael Lyons was the first resident pastor, and the original parish rectory served until it was razed in 1991.

The present parish church with its 60-foot steeple is actually the third place of worship for St. Patrick Parish. A second church was built in 1902, but was destroyed by fire just 18 years later on Jan. 25, 1920. Under the leadership of Father Thomas Fitzgerald, who served as pastor from 1915 to 1929, the parish rallied and made sacrifices to build anew. The new church was dedicated by Bishop Edmund Dunne on May 30, 1921.

Other nuggets from parish history include:

— The contributions of Benedictine Sisters from St. Mary Monastery in Nauvoo, who arrived in 1903 and would teach in Arlington Public School for more than 50 years.

— Construction of the present parish hall, completed in 1970 and named in honor of Bishop John B. Franz who was celebrating his golden jubilee that year.

— Benedictine monks from St. Bede Abbey were assigned care of the parish in 1980. That arrangement continued until 2008, when Father Paul Meismer was named pastor of both the Arlington parish and Holy Trinity in Cherry. After his retirement in 2011, Father Fixsen was named administrator and was appointed pastor of the Arlington and Cherry faith communities as well as St. Thomas More, Dalzell, in 2012.

He has guided a series of parish facility improvements, including the restoration of St. Patrick Church. In addition, the church belfry has been reinforced and the bell programmed to ring daily for the Angelus and before all Masses. Improvements have also been made to the parish hall. And in 2012, a Celtic Garden was blessed on the south lawn of the church.