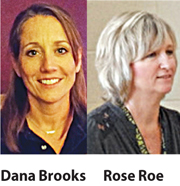 Photo Caption: Dana Brooks will be regional director of religious education for the Galesburg and Macomb vicariates while Rose Roe will serve the Rock Island and Kewanee vicariates.

Being the regional director of religious education means working with 12 or more parishes across two vicariates of the Diocese of Peoria. That might seem like a daunting task, but Dana Brooks of New Windsor and Rose Roe of Colona were already serving more than one parish when they were named regional DREs in June.

Roe, coordinator of religious education for St. Patrick in Colona, St. John the Baptist in Rapids City, and St. Mary in Hampton, is the new regional director for the Rock Island and Kewanee vicariates. She succeeds Barb Liska.

They are part of a team of five master catechists who are extending the care and support of the Diocese of Peoria to people involved in faith formation across central Illinois. That includes helping the parishes with Catechetical Sunday celebrations next weekend.

The theme for Catechetical Sunday, which is observed on the third Sunday of September, is “Teaching About God’s Gift of Forgiveness.” It is sponsored by the U.S. Conference of Catholic Bishops’ Committee on Evangelization and Catechesis.

Celebrations around the country include honoring catechists, teachers and directors of religious education at Mass with prayers and special blessings, handing out prayer cards and certificates, and holding receptions.

“We have the catechists come up before or after Mass and Father (John) Thieryoung prays over them,” Brooks said of her parishes — St. Catherine in Aledo, St. Anthony in Matherville, and St. John in Viola. “Then we have the students stand and pray for them. We go on until everyone is standing.”

The observance also includes a prayer to the Blessed Mother “to guide our program and our studies and our walk with her Son,” Brooks said.

SPREADING GOD’S GLORY
Brooks said her work with the three parishes and youth ministry with students from Mercer County High School in Aledo, Sherrard High School in Sherrard, and Rockridge High School in Taylor Ridge prepared her for her new post by giving her a “bigger vision.”

“It’s like looking at a neighborhood instead of just my house,” Brooks told The Catholic Post. “The demographic fits in with where my heart and mind are anyway.”

The area she covers goes as far south as Nauvoo and Rushville and as far east as Canton, and there are “lots of corn fields and bean fields between us.” Her primary job is to reach out and bring people in, providing as many opportunities as possible for people to “engage the Lord.”

Brooks also hopes to be the voice that says, “Your neighbors over here are doing this.”

“I want to unite us so we can support one another and spread the glory of God to each other,” she said, adding that this outreach is only natural when people know their faith and experience God’s love and mercy.

“Once you’ve been given the gift, it’s only natural to give it away,” she explained. “We shouldn’t keep it to ourselves, but pass it on to each other. That way the Lord’s love grows.”

Based at St. Catherine in Aledo, Brooks has been the DRE for Mercer County for about 13 years. Before that, she was a catechist for eight years.

She is also a certified spiritual mentor.

Brooks has been married to her husband, Jay, for 25 years and they have a grown daughter. They are members of St. Anthony in Matherville.

“I’m happy and blessed and joyful meeting the people I have so far,” she said. “I look forward to going to their areas and getting to know them.”

A BLESSING
Roe said she learned to be active in parish life by watching her parents, who taught religious education and served on parish committees. When she married her husband Frank 29 years ago, they promised each other that they wouldn’t be “drop-off parents” either.

“I wanted them to see me as involved as my parents were with me,” she told The Post.

Even though they were a military family — Frank is retired from the U.S. Navy — Roe started teaching religious education when they were living in Virginia Beach. When they transferred to the Quad Cities in 2000, she signed up to teach CCD at St. Patrick in Colona.

“In 2003, Father (Duane) Jack asked me to be the coordinator,” she recalled. While she tried to demur, he told her, “You’re a military wife. You can handle it.”

“He assured me he’d be there for support. It’s been a blessing ever since,” Rose said.

She also holds two part-time jobs — one working with juvenile delinquents in a detention center and the other working with children in an after-school program at an area KinderCare.

Everything she does convinces Roe that parents must be good role models for their children and faith must be a part of everyday life.

“Sometimes church is put on the back burner and it shouldn’t be,” she said. “It’s just as important as sports, choir or any other school activity as far as I’m concerned.”

Her goal as a regional DRE is to be a connecting point for the catechists and DREs, to support them in whatever way she can, and to keep them focused on what they do.

“I want to be able to be there and promote our faith to others and make sure that we don’t forget the importance of our faith, to build on that for future generations,” Roe said.