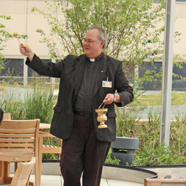 Sometimes the best medicine isn’t the kind that is prescribed. Sometimes it comes in the form of a ray of sun, a breath of fresh air, and a moment or two of peace.

Parents in need of that gentle healing at Children’s Hospital of Illinois at OSF Saint Francis Medical Center in Peoria can find it in the Jerry and Lynn Flaherty Family Respite Garden. Located on the rooftop outside the fourth floor, it is open to the families of pediatric patients from 9 a.m. to dusk, March through October.

The Flahertys, members of St. Thomas the Apostle Parish in Peoria Heights, made the garden possible with a $500,000 gift, which was matched by Caterpillar Inc. Now retired, Mr. Flaherty worked at Caterpillar for 43 years.

“There is nothing more Franciscan than this. To get in touch with nature does bring some comfort to the soul,” Msgr. Bliss told The Catholic Post.

“We all need that,” he said. “These family members, they’re not able to walk away from what’s happening, but they can come out here for a moment and find some refreshment. Hopefully it will give them a little bit of a break and it will be renewing for them.”

The Flahertys understand the importance of that. Their three sons were born prematurely and required neonatal and pediatric specialty care at OSF Saint Francis.

“Over the years we’ve often said, ‘Wouldn’t it be nice for the mothers, particularly, needing this type of care,” Mr. Flaherty said. “We ended up with what I think is a beautiful garden. In my opinion it’s outstanding. It met every single one of our expectations.”

The Family Respite Garden has nine trees, 20 shrubs and 1,837 perennials. They were chosen to attract birds and butterflies and their bloom periods were staggered, according to information provided by OSF Saint Francis.

There is controlled access to the garden and only 17 people at a time will be allowed to visit to maintain a peaceful atmosphere.

Healing messages are etched in the glass that surrounds the garden. One them, from St. Pio of Pietrelcina, says it all for Mrs. Flaherty: “Pray, hope and don’t worry.”

“You pray and you hope for your children and please don’t have any worries,” she said. “That to me is what I’m hoping for these families, that they can step out there with the trees and the flowers. Maybe children can be wheeled out there.”

“Many, many people will get many, many years out of these gardens,” Mr. Flaherty said.

April Landrus of Princeton and her children Rylee and Ashton, who spent 85 days at Children Hospital, watched the garden take shape. Ashton completed his treatment but returned to represent the families that will benefit from the space.

After helping to cut the purple ribbon, he declared the respite garden to be “awesome.”

“I really wish it had been done when I was here,” he said.