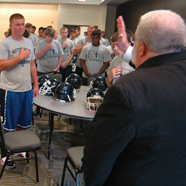 In the midst of an intense pre-season training period known as “hell week,” it may be a day set aside to focus on heaven and getting to know teammates personally that proves most beneficial for Peoria Notre Dame’s football team.

“No other school is doing this in town,” said Msgr. James Kruse, vicar general of the Diocese of Peoria, in his homily at a Mass opening a daylong Catholic Leadership Team Building Seminar on Aug. 14 at the Spalding Pastoral Center in Peoria.

Bishop Daniel R. Jenky, CSC, was principal celebrant of the Mass and spoke with the Irish squad afterward.

“Back in the 1980s I said Mass for the ‘other Notre Dame,'” said Bishop Jenky, recalling his years as chaplain to the University of Notre Dame football team while serving as rector of Sacred Heart Basilica and having other duties on campus.

“It’s a thrill for me to be back with the Fighting Irish and to pray with you,” said the bishop.

Bishop Jenky told the team that research shows that brotherhood — concern for one another — is a major motivator in times of war.

“They won’t give up for one another,” said the bishop, adding that outlook “has something to say about the Christian life.”

“We are not individual Christians,” said Bishop Jenky. “We are in a certain sense a band of brothers. We collectively are the Body of Christ. We all have a role to play and we’re essentially connected to one another.”

“It makes me happy I can show that to the opponents, referees, and the whole field,” said David Shadid, a senior about the helmet cross. “It reminds me of what we as Catholics stand for.”

POWERFUL MOMENTS
Conducting the day on behalf of Peoria Notre Dame was Lou Judd, co-founder of the organization SportsLeader. He guided the team through various talks and activities designed to open communication, build leadership, instill trust and commitment, and grow in faith.

“The first step in leading teammates is you have to know them,” said Judd prior to the first of several activities that asked the football players to talk about their personal lives and interests. By the end of the day, said Judd, “I hope you genuinely care about the success of every player in this room.”

With extra time at the end of the day, the group did a “forgiveness exercise” which Judd said “was quite possibly the most powerful moment of the day.”

“You’ll be able to look back and say ‘I was the first team to do it, now they all do it,'” said Walters, who spoke about his own faith and led prayers during the day.

“Our lives were built for eternity, not just for this short time,” he told the team. He hoped the day would help prepare team members not just for leadership in football but to “lead your family, your businesses, and in your parish.”

Shadid agreed. “I loved how it had aspects of Catholicism but also important parts of football, he said, calling the team building experiences “amazing.”