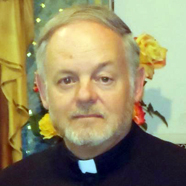 Father Reese’s health has deteriorated since the story on him appeared in the Catholic Herald of Milwaukee. Difficulties with swallowing in recent weeks led to his hospitalization in Colorado. He has just been moved to a long term acute hospital in Loveland, Colorado, where he continues to appreciate prayers.

His parents and a brother live in Aspen, Colorado, and he has a sister in Boulder.

Father Reese officially retired in mid-July and had been in residence at Our Lady of Mount Carmel Parish in Kenosha, Wisconsin.

Father Dwight Campbell, pastor of Our Lady of Mount Carmel, said Father Reese continued to concelebrate Mass into the summer. Still able to walk and drive, though physically weaker, he even volunteered for Communion calls in early August — communicating using a voice function on his iPad. He was on his way back from a family wedding in California when his inability to swallow became acute.

“I’ve never seen him complain or get angry,” said Father Campbell. “He’s an inspiration. I’d be pulling my hair out if I couldn’t communicate.”

Born in Granite City, Father Reese was ordained for the Diocese of Peoria on May 25, 1991. He is a former parochial vicar at St. Pius X, Rock Island, and Holy Family, Lincoln, and has served as pastor of St. John, Woodhull, and St. John, Galva, as well as St. Mark, Peoria. He was released for doctrinal studies in 2006 and has been at Our Lady of Mount Carmel in Kenosha since 2011.

Cards or letters of prayerful encouragement may be sent to Father Reese in care of the Kenosha parish. The address is 1919 54th St., Kenosha, WI 53140.