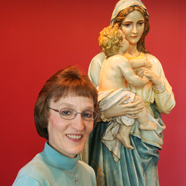 ROCK ISLAND — Sister Jackie Walsh, OSB, isn’t comfortable being the center of attention. She’s happy to remain behind the scenes, making certain everything is in place for retreats and meetings at Benet House Retreat Center, where she serves as administrative assistant.

All eyes were on her Aug. 23, however, when she professed her final vows as a member of the Benedictine community here. Her family and friends also joined in the celebration at St. Mary Monastery.

“I feel like I am triply blessed. I have three families,” Sister Jackie told The Catholic Post shortly before her final profession. “I have my Benedictine family, I have my biological family and I have my friend family. . . . I’ve always had strong support from all three.”

Just as her parents, Rita and Lawrence Walsh of Bourbonnais, and her six brothers and sisters have always been there for one another “no matter what the circumstances,” so have her Benedictine Sisters.

That was especially true in January, when pipes at the monastery burst late one night and the Sisters worked for hours to get the water out of the chapel and the kitchen.

“We pitch in to do what we can do together,” Sister Jackie said.

NO TOPPING GOD
That feeling of peace and calm reassurance is something she has felt since she first visited St. Mary Monastery as the guest of Sister Helen Carey, OSB, in 2006.

Sister Jackie had worked for many years in the insurance industry and was living in Bloomington when she met Sister Helen at a Cursillo weekend in 2003. The two got to know each other as Sister Jackie got more involved in Cursillo and soon she was praying Vespers with the little Benedictine community.

“Initially it was, ‘Call us. When it’s OK, come over.’ Then I came every day unless it wasn’t OK,” Sister Jackie said with a smile.

That led to an invitation to become an Oblate or lay affiliate of the Benedictines. Eventually she went to the Rock Island monastery.

“We walked in and I felt like I was coming home,” she recalled.
Sister Jackie had considered religious life as a child and her interest was piqued again. “I went home thinking, ‘Wow. Could I be a Sister? Would I be a good one?'”

She became an Oblate of St. Mary Monastery in 2007 and entered the Benedictine community as a postulant a year later. She professed first vows on June 11, 2011.

“I didn’t visit any other communities. I am a person that I know what I like when I find it,” she said.

Her large family had prepared her for community life and a simple lifestyle. Her father was in construction and worked seasonally, so she grew up appreciating what she had.

While people have suggested she had to give everything up to enter consecrated life, she prefers to think about everything she’s gained.

“I wasn’t running away from anything. I had my own house. I drove cars. I made my own decisions. . . . I had a good-paying job,” Sister Jackie said.
“But I have such a sense of peace that I didn’t have before and I don’t think there’s a better employer anywhere. I mean, who can top God? God’s love and compassion and mercy are boundless.”