Silenced by ALS, Father Reese still has a powerful message 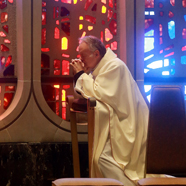 Photo Caption: Father Benjamin Reese, a priest of the Diocese of Peoria, kneels in prayer earlier this year at St. Mark Parish in Kenosha, Wis.

By: By Karen Mahoney

EDITOR’S NOTE: The following appeared in the April 3, 2014, issue of the Catholic Herald, newspaper of the Archdiocese of Milwaukee, and is published here with permission. For an update on Father Reese’s condition, click here.
For an editorial on the Ice Bucket Challenge supporting ALS research, click here.

KENOSHA, Wis. — In the middle of a board of directors meeting for St. Joseph Academy here last year. Father Benjamin Reese had so much to say, but couldn’t seem to get the words out.

The 55-year-old priest of the Diocese of Peoria who served on the in solidum team at Our Lady of Mount Carmel and St. Theresa the Little Flower parishes in Kenosha salivated excessively and began slurring his speech that night.

It was the same night that Cardinal Jorge Mario Begoglio was installed as Pope Francis.

That day also marked the Vigil of the Feast of St. Joseph and, according to Father Reese, it was no coincidence his eventual diagnosis of amyotrophic lateral sclerosis (ALS) or Lou Gehrig’s disease began that day.

“It seems that my illness is somehow linked to the papacy and to Catholic education through the intercession of St. Joseph. I had offered a public holy hour earlier that month for the pope and I have offered my suffering for him, our two wonderful bishops, St. Joseph Academy and, of course, my parishes,” he said in an email interview with the Catholic Herald, the newspaper of the Archdiocese of Milwaukee.

“St. Joseph is really helping me with this disease,” Father Reese continued. “I pray to him daily and use the blessed oil from his shrine in Montreal every night.”

Father Reese and Father Dwight Campbell, also a priest of the Diocese of Peoria who serves the Kenosha parishes, are members of the Apostles of Jesus Christ, Priest and Victim. While both are diocesan priests, their society includes the sharing of a common life, praying together and sharing a meal each day. The society’s charism is to sanctify its members through conformity to Christ crucified in a mission of shared charity.

“We share a common life in a way that is amenable to living a diocesan priestly life,” said Father Campbell. “It is our mission to save souls, and we carry that desire out in communion with the pope and the bishops. We offer our lives and sufferings daily in union with Jesus, High Priest and Victim, in the Holy Sacrifice of the Mass and with Mary, our Mother in the Order of Grace.”

“80 PERCENT OF WHAT HE WAS”
With ALS, motor nerves mysteriously die, wasting muscles, but the minds of its victims remain vibrant as ever. Most sufferers deal with physical limitations first; however, in the case of Father Reese, his type is called bulbar-onset, meaning it affected the bulbar region of the brain, which controls speech and mouth movement. That explained the months of slurring and vocal weakness before his official diagnosis.

“His symptoms began a year ago and his outer extremities seem to be mildly affected and he is about 80 percent of what he was,” said Father Campbell. “He is still able to cross-country ski, drive and do most of his priestly ministries, except that he can’t offer Mass alone. This has been the most difficult cross for him. He can concelebrate Mass and can say the words of consecration very slowly, but that is about all he can do.”

Through the assistance of his physician, Dr. Paul Barkhaus, and his team at Froedtert Medical Center, Father Reese is on a waiting list for adult stem cell thereapy for ALS at Mayo Clinic.

“I will try to minister as long as possible, and my parishioners and others are praying daily to (Pope) Venerable Pius XII for the recovery of my speech,” he said via email. “Jesus healed many mutes, (Mark 7:31-35) and paralytics.”

MASS WITH POPE FRANCIS
Last fall Father Reese made a pilgrimage to Rome and concelebrated with Pope Francis and prayed at the tombs of St. Peter and Pius XII. He said the high point of the trip was Mass with the Holy Father and the image of Our Lady of Fatima.

“The message that I got there was to offer everything up to the Sacred Heart of Jesus through the Immaculate Heart of Mary, and especially for Pope Francis, like Blessed Jacinta of Fatima did,” he said. “It is always great to pray at the tomb of St. Peter. There were many bishops and priests there to remember Venerable Pope Pius XII and to pray for his intercession.

“When I prayed in the tomb, I felt that God would answer my prayer for healing in some way in his good time. I have started a Facebook page, ‘Miracles of Pius XII,’ to encourage devotion to him, and we have seen the health of many people improve when praying for his intercession.”
In addition, his prayers provided a self-revelation that the church suffers from a spiritual ALS.

Some priests, said Father Reese, “don’t preach the whole Gospel, especially the moral issues, and so the tongue doesn’t say what the head (the pope) thinks.”

iPAD HELPS HIM COMMUNICATE
To assist Father Reese with ministerial duties, he relies on an iPad to communicate with others by typing the words, and, in turn, a program translates his words into voice messages.

“He was using it at first to give homilies on Sunday, by putting the microphone on it,” said Father Campbell, “but now he has to concelebrate Mass with me or another priest.”

Using the iPad to minister has allowed Father Reese to continue working with school children and members of the congregation for school Masses and when he hears confessions.

Medication helped briefly with the speech issues, but Father Reese admitted it has once again declined.

Not one to let the diagnosis get him too discouraged, the Colorado native spent his free time on his skis last winter.

“I am of Norwegian descent and skied a lot while growing up,” he said. With ALS, however, he avoided downhill skiing and stayed in when it was below 20 degrees.

Watching him as a friend and fellow priest, Father Campbell has observed Father Reese abandoning himself into God’s hands.

CROSS IS GOD’S WILL
“Whatever God wills, he wills,” said Father Campbell. He described Father Reese as “patient,” adding “I have much admiration for him as I know that this is a real cross.”

“He said to me a few months ago, ‘Of all the types of ALS I had to get, it was the one that strikes you in the mouth.’ I think with being a priest it is a bigger cross, but I think he has shown a heroic perseverance and abandonment to God in light of these things.”

Parishioners have rallied around Father Reese, praying for him through the parish Padre Pio prayer group. Elizabeth Cascio said he still assists with many daily Masses as well as Sunday Mass with Father Bruno (a helper priest).

“He is a true witness to his faith with the suffering that he has endured, and there would be something lacking in a person if Father Reese’s suffering and offering that suffering up doesn’t touch your soul and inspire you to try to live a more holy Catholic life,” she said.

Parishioner Colana Hutchinson said Father Reese is a wonderful example of what it means to offer up one’s suffering in union with Christ Crucified on the Cross.

“He is a man of great faith, and practices what he preaches,” she said. “One of his greatest desires is to live out his vocation as a priest. He has not let ALS stop him, but forges ahead with confidence that God will always bring about good as he continues to offer prayer for others with afflictions.”

NEVER ASKS “WHY ME?”
Parish organist Rita Gentile remarked that, unlike many who are afflicted with a serious illness, Father Reese has never asked, “Why me?”

“Instead, he sais, ‘This is God’s plan for me.’ He remains accepting, always in good spirits, and continues to find ways to celebrate Mass despite troubles with his speech,” she said. “Certainly, as a parishioner, there is a sense of comfort in seeing someone with a difficult diagnosis turn toward their faith for comfort and guidance, rather than turn their back on it.

Father Reese’s struggle and how he always finds the positive will definitely help parishioners in their own struggles, and teach us all a different kind of lesson in what it means to be Catholic.”

Father Reese, who was ordained May 25, 1991, at St. Mary’s Cathedral in Peoria — the same cathedral in which the Venerable Fulton J. Sheen was ordained — explained he tries to live day by day, and to thank God for the gift of his faith and priesthood.

“I am not worthy of my vocation, and I try to offer my sufferings in reparation for my sin,” he said. “I am basically very happy and grateful for all the kind prayers and encouragement of my parishioners, friends, and family. Friends from all over the world have been writing me and praying for me. I believe that I will somehow be healed, maybe not totally cured, through the intercession of Venerable Pius XII. Whenever I feel discouraged, I say, ‘Jesus, I trust in Thee’ or the words of Padre Pio: ‘Pray, hope and don’t worry. Amen.'”