Marian Missionaries lead a Day of Mercy in Rock Island 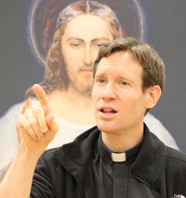 ROCK ISLAND — “Put mercy into action, especially where the need is greatest.”

That is a theme of the Marian Missionaries of Divine Mercy, and a group of the missionaries now on a 33-day tour across the United States led more than 50 volunteers in doing just that throughout the city on Aug. 7.

In addition, more than 400 attended evening talks by Father Michael Gaitley, MIC, and Father Chris Alar, MIC, at Sacred Heart Church as a 24-hour focus on Divine Mercy that began with a youth event the night before came to an end.

“Just as mercy goes (from Jesus) to us weak, broken sinners, we should also show the same mercy to those who are in need and suffering,” said Father Gaitley, director of the Association of Marian Helpers and author of books including “33 Days to Morning Glory” and “Consoling the Heart of Jesus.”

To that end, the two priests, a team of missionaries, and local leaders led a “Day of Mercy” in Rock Island that included assisting at a local food pantry, visits to those homebound and in four area nursing homes and senior centers, and door-to-door evangelization. In addition, teams were organized to walk through Calvary Cemetery and Mausoleum offering prayers for the salvation of those who died and their families as an act of mercy.

“There is a great need in our community for the love of God,” said Julie Hull, a member of Mary, Our Lady of Peace Parish in Orion who served as community leader for the tour’s stop in Rock Island. The Day of Mercy, she said, showed that the faithful can radiate that love in many ways, whether through prayer or providing for people’s basic needs.

The Marian Missionaries arrived in Rock Island on Aug. 6 and welcomed nearly 60 area young Catholics to hear the message of Divine Mercy at an event that evening at St. Mary Parish.

Father Alar was celebrant of a 7:30 a.m. Mass at St. Mary Church to begin the Day of Mercy. Following a breakfast and instructions in the parish hall, those volunteering to perform acts of mercy in the community had several options.

Hull said she was surprised by how many opted to accompany the Marian Missionaries on door-to-door evangelization.

“They may have found that the most uncomfortable, but that’s where most wanted to go and they felt very moved,” she said. Those found at home were invited to share prayer requests and encouraged to come to a holy hour, confession, and Chaplet of Divine Mercy that afternoon and the evening presentation at Sacred Heart.

At St. Anthony Continuing Care Center, Father Alar told about 20 residents gathered in the center’s chapel that while “society sees no value in the old, weak, or suffering, nothing could be further from the truth.” He encouraged them to unite their suffering to Christ’s cross for their salvation and that of their loved ones.

Father Alar and the volunteers spent time speaking with the residents, and the priest closed the gathering with an anointing of the sick for Catholic residents. More than 30 persons were anointed during the Day of Mercy.