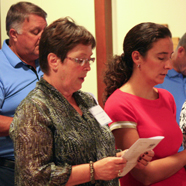 HENRY — As principals from around the Diocese of Peoria gathered at Nazareth House to prepare for another school year, Bishop Daniel R. Jenky, CSC, asked them to look past what they have to do so they could focus on what they are called to do.

“Those young people who are in your charge have a destiny that is glorious,” he told them at Mass in the chapel of the diocesan retreat house on Aug. 6. “They have the possibility — they have God’s promise — of knowing bliss and glory beyond our wildest dreams and we are the ministers of that mystery.”

Before the final prayer, they had an opportunity to respond to that call and be commissioned by Bishop Jenky for another year of service.

Responding “With God’s help, we will,” the principals agreed to commit themselves to “a disciplined life of prayer and study in order to grow into the impassioned spiritual leaders so necessary for a faith-filled future for our schools.”

The principals demonstrated their willingness to be those spiritual leaders even before Mass began as they prayed a decade of the rosary for Maddilynn Boultinghouse, a preschool student at Jordan Catholic School in Rock Island who died from injuries received in an accident. Her funeral was Aug. 9 at St. Pius X Church there.

During the commissioning ceremony they also promised to “champion superior standards of excellence in which Gospel values and Catholic teaching are integrated with lives and work of all members of the school community,” “provide leadership that is visionary, innovative and collegial” and show teachers and students by their example how to live “wisely and generously” in a “complex and secular world.”

Bishop Jenky prayed that God would “strengthen these servants of yours in their resolve to dedicate themselves as Catholic school principals. Through the coming school year, help them to meditate on your word that they may be filled with wisdom, patience and charity toward those they serve.”

He joined them for dinner after Mass and stayed to visit with them about French spirituality, the roots of his own religious community, the Congregation of Holy Cross, and its founder, Blessed Basile Moreau.

During the retreat, the school leaders also heard a summary of “Faith in Our Future,” a planning process that involved all diocesan schools last year, and what the next steps will be. For more information, see the story at