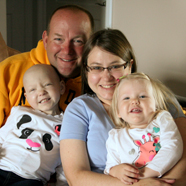 Photo Caption: Enjoying family time at home in LaSalle are Mike and Maria Rosploch with their daughters Lily (left) and Mya.

LASALLE — Lily Rosploch may be only 5 years old, but she knows the way to St. Bede Abbey Church in Peru so well that when her father, Mike, decided to take a different route from their LaSalle home one Saturday afternoon she called him on it.

“Lily always looks forward to going to Amen, as she calls it,” Maria said, noting that her daughter seems to know when it’s Saturday. “She’ll wake up and say, ‘It’s Amen today!'”

St. Bede Abbey and Academy have become a powerhouse of prayer for the youngster, who is being treated for neuroblastoma, a cancerous tumor that almost always affects children. She was diagnosed on her third birthday, June 28, 2012.

Mike is a 1987 graduate of St. Bede Academy, and Maria was in the Class of 1992, the 100th graduating class. Mike and Lily raised funds and then danced their way to the Mr. SBA 2014 title in March.

In the last two years, Lily has had surgery to remove 85 percent of her tumor, more than 50 rounds of chemotherapy, a bone marrow transplant, and 35 rounds of radiation. She was thought to be cancer free for three months, but the disease returned last November bringing with it more chemotherapy to stabilize the tumor and give her some relief.

Lily needs Amen more than ever now, as she receives I131-MIBG therapy at The University of Chicago Medicine Comer Children’s Hospital in Chicago. According to information on the hospital’s website, meta-iodobenzylguanidine (MIBG) is a molecule that is actively absorbed by the neuroblastoma cells and radioactive iodine is attached to it.

“The tumor will take in the radioactivity, but with that it will be taking the medicine that will hopefully destroy the tumor so we never have to see it again,” Mike Rosploch told The Catholic Post.

MOVING FORWARD
How long Lily is in the hospital depends on how quickly her body is able to secrete the radiation, he explained. The treatment began last Tuesday and the Rosplochs were told she could be there from three to five days.

They went through radiation safety training and have had limited access to their daughter. With lead shields around the bed, most interaction during I131-MIBG treatment is conducted through a window and by television monitor.

At the end of September she will be scanned to see if it was effective, according to Maria. Lily will continue to be followed by Dr. Susan Cohn at Comer Children’s Hospital through November.

“She’s had her days where she hasn’t been feeling good,” Maria said. “They all have those days, but once those days are over she’s a happy kid.”

That “happy kid” was very much in evidence during a recent visit, as she played and laughed with her 2-year-old sister, Mya, and they brought all their dolls out of her bedroom for Maria to hold.

“It’s nice to hear her laugh and see her smile,” Maria said, with her arms full of toys.

Even though there have been a lot of missed holidays and birthdays as they’ve sought treatment for Lily, Abbot Philip Davey, OSB, of St. Bede Abbey said the family is always celebrating something. He has anointed Lily before each course of treatment and did so again last weekend before the Rosplochs left for Chicago.

A sign hanging on a tree along St. Bede Lane seeks “Prayers for Lily.”
“There’s just not a lot of time to dwell on the negative stuff. It is what it is,” Mike said. “There’s nothing else you can do but go forward.”

PRAYERS, PLATELETS AND BLOOD
The only help the Rosplochs asked for is prayer. Maria said platelet and blood donations also help families dealing with cancer, because it gives the children a chance to “bounce back.”

“Sometimes you don’t realize how important or what a gift it is that people give time out of their day to give blood or give platelets,” Mike added.

The family continues to count their blessings.

Mike owns R&R Landscaping and Irrigation in LaSalle and Lily considers it a good day whenever it rains because he stays home to play and nap with her. What’s a good day for him?

“We’re home. We wake up every day and she’s here, she’s with us,” Mike said. “And we’ve still got hope. . . . There’s a very strong belief among us that this is going to help her.”