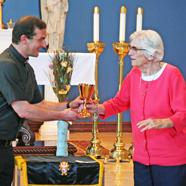 Photo Caption: Suzanne Reidy presents a chalice in honor of her late husband, John, to Father Johnathan Steffen for use at the St. John Paul II Newman Center in Normal.

NORMAL — John Reidy, Terry McReynolds and John C. Morris had two things in common. Not only were they all members of the Bloomington Knights of Columbus, Fourth Degree Assembly 213, but the Mass played a very important role in their lives of faith.

Last week, their brother knights made certain their love for the liturgy and the Lord they encountered there would live on by offering two chalices and one ciborium as gifts to the St. John Paul II Newman Center at Illinois State University. Family members were on hand to make the presentation to Father Johnathan Steffen, a member of the Newman Center’s sacramental team and parochial vicar at St. Patrick of Merna Parish in Bloomington.

“I can assure you that whenever a priest uses these he will see your loved ones and will pray for them,” Father Steffen said, noting the names of the deceased knights that were engraved on the bottom of the vessels. “Thank you very much.”

“On behalf of the students and everyone who comes here to pray, thank you to the knights and to these families for your generosity. I think it’s a wonderful gift to this beautiful chapel,” added Father Tony Lee, who was chaplain at the Newman Center last year. He also serves as pastor of Holy Trinity and Historic St. Patrick parishes in Bloomington.

Father Lee suggested that the Knights of Columbus consider replacing the chalices that were being used at the St. Robert Bellarmine Chapel at the St. John Paul II Newman Center. They needed to be replated and that would have been difficult, he said.

Presenting the chalice in memory of Reidy, a member of Holy Trinity Parish who died April 25, 2013, were his widow, Suzanne, and his son, Michael.

“My father was always proud to be a Catholic. He was very proud to be a Fourth Degree knight. We appreciate this honor,” Michael said. “We are very happy that this chalice will be used here at the Newman Center.”
The chalice in memory of McReynolds, who died Oct. 9, 2013, was presented by his son, Mark, and his daughter Karin Buhle. He was a member of St. Mary in Bloomington.

“One of the things about my dad is he didn’t miss church,” Mark told The Catholic Post. “This is a way he will be at Mass every week.”
Morris’ sisters, Marianne Hronek and Michele Pierce, presented the ciborium to Father Steffen. Morris, also a member of St. Mary in Bloomington, died on Feb. 6, 2014.

“John loved his church,” Hronek told The Post. “It was paramount to him. He always went to Mass on Sunday somehow. He based his weekend around church.”

Mike Tomlianovich, who coordinated the gifts and presentation as faithful navigator of Assembly 213, said it is a longstanding tradition for the Knights of Columbus to honor their deceased members by offering chalices to area churches in their memory.

“We work with the family members to choose the site that will receive them — someplace where there’s a connection,” he explained.

The evening also included installation of officers for Assembly 213 by Bernie Mennemeyer of Springfield, master of the Fourth Degree. A reception followed.