Sisters’ mission: saving souls from the perils of prostitution 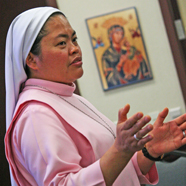 Photo Caption: “It’s so fulfilling if you can rescue one or two or three children in a night,” says Mary Queen of Heaven Missionary Sister Irene Baquiran.

Four times a week, members of the Mary Queen of Heaven Missionaries put aside their pale pink habits and white veils, don civilian clothing, and spend all night in the dark alleys, bars and night clubs of Cebu in the Philippines. They aren’t looking for fun, but to make life less miserable for the women and children who have been lured from their rural homes and forced into prostitution.

“We pray always the Prayer to St. Michael to guide us and protect us. This is the fight with the evil spirits,” Sister Irene Baquiran, MQHM, recently told members of the Diocesan Council of Catholic Women board. A member of the community who is touring the Midwest this summer, she has spoken around the Diocese of Peoria, including at the Saint John Summer Conference in Princeville.

“When we go out on mission we have to be equipped spiritually, physically. We bring all the sacramentals — holy oil, holy water, the Benedictine cross in our pocket, and the Prayer to St. Michael,” she explained, adding that the rosary is also a very powerful weapon.

“It’s scary, but it’s so fulfilling if you can rescue one or two or three children in a night. These are the souls God wants to be saved. One way or another our mission is saving souls from prostitution,” Sister Irene said.

During a video presentation about the Mary Queen of Heaven Missionaries, which were established in 1996, the DCCW board members learned that there are as many as 375,000 women and girls in the sex trade in the Philippines. Most are between the ages of 15 and 20, although some are as young as 8 years old.

It is estimated that they will have five sexual encounters a night, receiving only about 100 pesos or $2 for each one. Some are sold into sexual slavery by their parents, who wait to collect their “wages” at dawn.

Sister Irene said members of her community go into the bars and clubs where these women are being held and talk to them, with the permission of the owners and managers. The Sisters present themselves as missionaries, rather than members of a religious community.

“We’re not stopping anything or arguing. It’s not easy to argue with them,” she said. “They have all the guns. We would be killed on the spot.”

CONQUERING THE PHILIPPINES
What they can do is tell the young women and children there is hope and support waiting for them if they manage to escape — and they do. “They have the angels and saints guiding them, and the Blessed Mother also,” Sister Irene said.

Because poverty is the root cause of prostitution in the Philippines, the Sisters offer temporary shelter, basic health care, food and nutrition, medical assistance counseling, educational assistance, livelihood and skills training, and child care at their Home of Love in Cebu. Since 1996, they have helped more than 200 women leave prostitution behind and start new lives.

“In the center, the rehabilitation process, we give them spiritual formation at the same time,” Sister Irene told The Catholic Post. “Their morality is degrading. Their spirituality is zero because they are hopeless, but there is no hopeless with God. In God’s grace there is no hopeless.”

To break the cycle of poverty and prevent the proliferation of prostitution, the Mary Queen of Heaven Missionaries also work with sponsors to arrange for as many children as possible to receive an education. Every year they have 700 elementary school students and this year they helped 3,000 high school students. That number is expected to grow to 9,000 next year as word spreads.

Five members of the community have established a house in California and are working to raise the necessary funds. Sister Irene said $25 a month covers school supplies and provides two uniforms, part of their food allowance and part of their transportation to and from school.

“We are trying to conquer the Philippines by 2021, but we cannot do it alone. That’s why we need help,” she said. “It’s helping someone in dire need, to save their souls and give them a new life.”

HOW YOU CAN HELP
For more information about the Mary Queen of Heaven Missionaries, visit
mqhm.weebly.com, follow them on Facebook or send email to srirene82772@gmail.com.