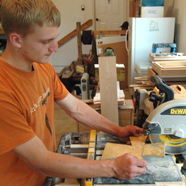 Photo Caption: Scott Schoonmaker cuts a tile cross. An online catalogue of his creations is at stojoart.com.

MOLINE — Scott Schoonmaker and his father were tiling a bathroom floor at Scott’s grandparents’ home when the Moline teenager thought of another use for the tile.

“I just decided to see if I could make something cool out of it,” said Scott, now 17.

For this artistic, home-schooled 17-year-old, there is nothing cooler than his Catholic faith. So Scott took a tile piece to a workshop in the garage of his family home and cut it in the shape of a cross. He later added a silver corpus of the crucified Christ obtained from a Catholic supply store.

The tile crucifix was hung in an in-home chapel at the Schoonmaker’s residence, where it was noticed by visitors who wanted one for their home.

It wasn’t the first time Scott’s religious art had been appreciated. He had already given away several images of St. Francis of Assisi he had cut from wood using a scroll saw — an intricate skill he learned from neighbor Ralph Liddell.

So the entrepreneurial son of Kevin and Maggie Schoonmaker decided the time had come to “make some other stuff” and offer it for sale.

He designed a variety of tile crosses, including free standing, framed, and wall mounted in several sizes. His source material? Sample tiles that area stores were ready to discard. Scott then expanded his wood creations to include Nativity scenes, and images of Mary holding the infant Jesus, including one using the scroll saw method.

EVANGELIZATION IS HIS GOAL
This year his work has been displayed at the Quad Cities’ juried art show called “Art of Faith.” Scott was also a vendor when noted Catholic speaker Teresa Tomeo visited a nearby parish on Mother’s Day.

His downstairs bedroom has become an art showroom, complete with display shelves. And he launched a website, stojoart.com, with photos of his creations and instructions for how to order them.

Why does he focus on religious art?

“If it’s worth doing, it’s worth doing for a good purpose,” Scott told The Catholic Post. “You can’t get a much better purpose than evangelization. That’s the main goal.”

Scott has had several carpentry mentors. In addition to his neighbor, who died this spring, Scott was also trained by his grandfather and father.

“I used to work with my grandpa in the garage, making swords and stuff,” said Scott. “He had a camper he liked to fix up, and I helped.” Likewise, he assisted his dad fixing houses to rent or “flip” for resale.

But the teen who can spend all day in a carpentry shop has another model. Ask him his favorite saint, and it’s no surprise Scott answers St. Joseph.
After all, his art is offered under the company name of “StoJo,” a title he came up with back in second grade. Why the “o” in the middle of abbreviations for saint and Joseph?

“To make it sound cool,” he explained.

Scott is the second oldest of the Schoonmakers’ five children. The family attends daily morning Mass.

Whether Scott is creating with pen and paper or with power tools, “he loves glorifying God with his art,” said Maggie Schoonmaker. She coordinates the New Evangelization Network, informing area Catholics about speakers and major faith-centered events coming to the Quad Cities region and is also active in the pro-life cause. Her son donates a percentage of the profits from art sales to the Women’s Choice Center, a pro-life outreach for the Quad Cities region.

Scott’s most extensive woodworking project came as the result of a promise he made to his confirmation sponsor, a young missionary woman who lived with the family for a time.

“I told her I would make her a kneeler for when she got married,” said Scott. He made good on his promise, and the bride-to-be cried when she saw it. Scott has since made other kneelers.

He hopes to continue with his art, and perhaps build a shed for a growing workshop. But as he looks ahead to college, Scott foresees a vocation in conjunction with God’s artistry evidenced in the plant world. Already an operator of his own landscaping business, he plans to study horticultural sciences.