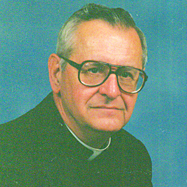 PERU — A Mass of Christian Burial was offered in St. Bede Abbey Church on July 9 for Father Henry Fritz, OSB, who served as a teacher and principal at St. Bede Academy for 37 years and gave nearly 30 more to parishes around the Diocese of Peoria.

Abbot Philip Davey, OSB, of St. Bede was the celebrant and homilist for the Mass. Burial was in the abbey cemetery.

Father Henry died on July 6, 2014, at St. Margaret’s Hospital in Spring Valley, several days after he had a severe stroke. He was 89.

The son of Henry E. and Marie (Nilles) Fritz, Father Henry was born in Chicago on April 3, 1925. The following year his family moved to Pontiac, where he attended St. Mary School and worked at a variety of farm jobs.

Father Henry was ordained on May 22, 1952, by Bishop Martin D. McNamara at the Cathedral of St. Raymond in Joliet. At that time the Diocese of Peoria was waiting for a new bishop to be appointed following the death of Archbishop Joseph H. Schlarman.

He earned a bachelor’s degree from St. John’s University in Collegeville, Minnesota, and a master’s degree in economics from the University of Notre Dame. He also pursued advanced studies in guidance and counseling at Loyola University, Chicago.

ST. BEDE TEACHER, PRINCIPAL
Father Henry taught history, political science and economics at St. Bede Academy from 1952 until 1977, and was principal from 1977 to 1985. During his years at the school he also served as prefect of students, band director, yearbook moderator, softball coach, and guidance counselor, and was often in demand as an umpire or referee at sporting events.

Remembered as “an able if sometimes irascible administrator,” Father Henry is credited with instituting the annual dinner auction in support of St. Bede Academy.

Named pastor at St. Benedict in Ladd in 2005, Father Henry would remain there until retiring to St. Bede Abbey in 2012. Despite suffering from arthritis, he continued to make regular visits to his brother monks at St. Joseph’s Nursing Home in Lacon.

He reportedly missed his parish ministry a great deal and maintained an avid interest in diocesan affairs, keeping in contact with clergy and former parishioners from all over the region.

Preceded in death by his parents and one sister, Mary Lenore Braddy, Father Henry is survived by two sisters, Dolores Coughlin of Chicago and Marilyn Weber of Pontiac, and the monks of St. Bede Abbey.