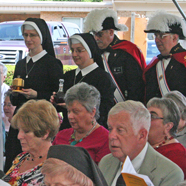 LACON — As Sister Olga Poluch, DSF, stands in front of St. Joseph’s Nursing Home and looks around, she remembers that there was nothing but grass and cows on the property when she arrived from Slovakia with 14 other Daughters of St. Francis of Assisi in 1946.

That didn’t hold them back for very long. On Jan. 28, 1964, the Franciscan community, which is dedicated to health care, broke ground for St. Joseph’s Nursing Home and on May 17, 1965, they welcomed the first residents.

Bishop Daniel R. Jenky, CSC, recently joined Daughters of St. Francis of Assisi from around the world to celebrate the home’s 50th anniversary. Among them was Sister M. Gerarda Farska, general superior, who made a special trip from Europe for the event, which included a Mass and reception on the front lawn, and a luncheon.

“In serving the sick and the elderly the congregation and the entire staff does lovingly serve Jesus, because in the Franciscan tradition they have discovered a deeper experience of God’s love in ministering to their neighbor,” Bishop Jenky told the Sisters and their guests.

“They have returned some measure of God’s great goodness by embracing the needs of the sick. In the ministry of Franciscan service, through countless acts of love for 50 years here in Lacon, Illinois, they have helped to build up the kingdom of God, whose firm foundation is always love,” he said.

THANKSGIVING ABOUNDS
Speaking to The Catholic Post through Sister M. Loretta Matas, regional superior for the congregation in Lacon, Sister Gerarda also spoke of thanksgiving for the many ways God has provided for the community and taken care of St. Joseph’s Nursing Home for 50 years. That gratitude extended to the 15 pioneer Sisters who accepted the mission, three of whom are still living.

In addition to Sister Olga, who is now retired to St. Joseph Convent after many years of service as an activity director at the nursing home, they include Sister Cornelia Blasko, DSF, and Sister Alphonse Husak, DSF.
Sister Gerarda also expressed her appreciation to people “for so many years of dedicating their time, talent and treasure to this mission.”

“This mission is not only that we have a nursing home or that the Lacon community has a nursing home,” Sister Loretta said. “Our mission is taking care of people who need it not only for the body but for their spiritual and physical health.”

While the facility has 93 beds in two wings — one devoted to St. Joseph and the other named for St. Francis — at the heart of the home is a chapel, she said.

“That chapel brings everyone together — not just the Catholics, but everyone,” Sister Loretta explained.

The home’s current chaplain, Father Tom Mizeur, and retired chaplain, Father Harold Schmitt, concelebrated the Mass with Bishop Jenky, along with other area pastors. Also present was Abbot Philip Davey, OSB, of St. Bede Abbey in Peru, where the first Daughters of St. Francis of Assisi worked in the kitchen, dining room and laundry and took care of the students and monks as they learned English and established themselves in central Illinois.

EDITOR’S NOTE: For an historical account of St. Joseph’s Nursing Home of Lacon, told from the perspective of one of the pioneers, see the related story on Sister Olga here.