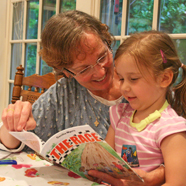 Photo Caption: Ceil Myers reads “The Race” to her granddaughter, Anabelle Myers. The first-time author will sign books at Lagron-Miller in Peoria on Saturday, July 12.

Some of the best things in Cecilia Myers’ life weren’t planned.

Among those special moments are close encounters with St. John Paul II at World Youth Days in Paris and Rome, and Blessed Mother Teresa of Calcutta during her visit to Peoria in 1995. Then there was the morning 10 years ago when her husband, Dr. Cliff Myers, a Peoria ophthalmologist, told her he had decided to enter the Catholic Church.

Now she can add the title “author” to that list of unexpected blessings. Her first book, “The Race,” has just been published by Tate Publishing & Enterprises, a Christian-based, family-owned company based in Mustang, Oklahoma.

“The Race” tells the story of Mary, who has been training for a race. The faithful little girl just happens to use leg braces and the other contestants have physical or developmental challenges, too. What happens during the race, through the power of prayer, takes everyone by surprise.

Making Myers’ joy complete is that “The Race” was illustrated by her mother, Dwyn Conway, an artist who lives in Washington, D.C.

“I said, ‘Mom, I’ve got this poem. Why don’t you illustrate it?’ I didn’t know that we were going to ever publish it,” said Myers, a member of St. Vincent de Paul Parish, where everyone knows her as Ceil. “She didn’t say anything about it.”

Nine months later, Myers got it back as a Christmas present. With text and illustrations in hand, she started looking for publishers a year ago and it was picked up by the Children’s Division of Tate Publishing last October.

While soft-cover copies of “The Race” may be purchased at several locations in the Peoria area — including Lagron-Miller Co. — it won’t be released officially until July 22. At that time hard-cover copies will be available on Amazon and at Barnes & Noble and an audio recording of Ceil and Cliff Myers reading it may be downloaded.

In the meantime, Lagron-Miller, 4517 N. Sterling Ave., will host a book signing on Saturday, July 12, from 11 a.m. until 1 p.m. Myers said other promotional events are being planned.

RAISING THE BAR
The eldest of Skip and Dwyn Conway’s 12 children, Ceil Myers spent time in Southeast Asia and Brazil, as well as the United States. Her father served in the military and then joined the Peace Corps, taking his family with him around the world.

He was recruited by the State Department and the family settled in the Washington, D.C., area. Myers pursued a career in neuro-ophthalmology and met her husband, Cliff, during his residency in Dallas, Texas.

Married in 1983, they moved to Peoria to set up his practice. She worked at OSF Saint Francis for five years and then stayed home to raise their four sons. Ten years ago she went back to work and is now on call at the Illinois Neurological Institute in Peoria.

Myers has always had a special place in her heart for special needs children. Her main inspiration has been her sister, Susie Conway, who had meningitis and encephalitis as a child and continues to deal with cerebral palsy and a birth defect that requires her to use a prosthetic for her leg.

“The kids would make fun of her, but she would say, ‘That’s how God made me.’ She was very proud of that,” Myers said. “There’s something special in all of these kids really.”

Myers served as a room mother for a special needs classroom at Keller School in Peoria before her children started attending St. Vincent de Paul School. As a playground supervisor at St. Vincent, she noticed how tenderly principal Jim Troy treated a child who was “differently abled.”

“That boy was happy and full of joy and awe,” she said. “He raised the bar to other people just by being there.”

Myers hopes that what people take away from “The Race” is how much God loves us, just as we are. “You have to become like children to enter the kingdom of God,” she said.