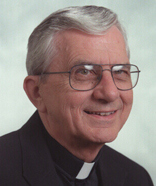 MENDOTA — A Mass of Christian Burial was offered on Friday, June 20, at Holy Cross Church here for Msgr. Richard G. Fitzsimmons, 83, a senior priest of the Diocese of Peoria and former pastor of parishes in Mendota, Peterstown, Westville, LaSalle, Wapella, and Downs.

Msgr. Fitzsimmons, a native of Lincoln, died on Monday, June 16, 2014, at his residence in Batavia.

Burial was at Holy Cross Cemetery in Lincoln.

Born June 29, 1930, in Lincoln to Joseph Emmette and Mary Catherine (Fahay) Fitzsimmons, he attended the former St. Patrick Grade School and is a graduate of St. Bede Academy in Peru. His preparation for the priesthood was completed at St. Ambrose College in Davenport, Iowa, and St. Mary of the Lake Seminary, Mundelein.

He was ordained by Bishop William E. Cousins in Peoria on May 27, 1956.
Msgr. Fitzsimmons served as parochial vicar at St. Roch Parish in LaSalle for 12 years. In 1968, he became pastor of St. Patrick, Wapella, and St. Mary, Downs.

During his first year as pastor in Wapella, a tornado destroyed the rectory and church steeple. Under Msgr. Fitzsimmons’ guidance, the church was renovated and a new rectory completed in 1969.

He returned to St. Roch as vicar adjutor in 1970, and nine years later was named pastor of Resurrection Parish, LaSalle. In 1988, he began a 12-year tenure as pastor of Holy Cross Parish, Mendota, adding pastor duties at Sts. Peter and Paul in Peterstown in 1991. He was granted senior status and the title of pastor emeritus in 2000.

Msgr. Fitzsimmons was a former member of the diocesan College of Consultors and vicar of the LaSalle vicariate. He was named a prelate of honor with the title of monsignor in 1993.

In 2006, on the occasion of the 50th anniversary of his ordination, Msgr. Fitzsimmons told The Catholic Post he knew he was called to the priesthood since seventh grade. While praying in front of the Blessed Sacrament at St. Patrick’s, “I heard Jesus say that ‘I want you to be a priest,’ and you don’t argue with that,” he said. “I never looked back,” he added, saying he loved the priesthood and that the places he served “were all great parishes.”