Diocese thanks school officials at end of year Mass, luncheon 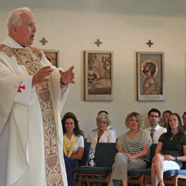 Photo Caption: Msgr. John Prendergast, vice chancellor of the Diocese of Peoria, asked principals to remember that students will look to them to see the joy that comes from a relationship with God.

Even principals look forward to having some free time in the summer, but that isn’t why they were celebrating at the End of Year Mass and Luncheon on June 4 at the Spalding Pastoral Center in Peoria.

During the gathering the Office of Catholic Schools honored pastors and principals of Catholic schools for milestone years of service and thanked those who are retiring. As the chief catechist of the Diocese of Peoria, Bishop Daniel R. Jenky, CSC, was singled out for his work on behalf of Catholic education in central Illinois.

Father David Richardson, pastor of St. Philomena Parish, said one of the privileges of working with Peine is seeing how she puts the students first every day.

“Everything she does is, ‘What’s best for the kids? What’s going to help them move along? What’s going to teach them about God loving them and using their minds to the best of their abilities?'” he said. “There are endless things I could say about the programs and the growth we’ve had in the school, but really at the top of the list is putting kids first, always.”

“You all know, principals, you have the teachers that step up and Mrs. Knapp is one of them,” said Anita Kobilsek, principal of Holy Cross in Mendota. “I just want to say thank you for all your good work and we appreciate it so much.”

Dr. Sharon Weiss, superintendent of Catholic schools for the Diocese of Peoria, added her thanks to Knapp “for representing all our teachers.”

Michael Daly, principal of Jordan Catholic School in Rock Island, is retiring, while Gail Hulse, principal of St. Mary School in Kickapoo is relocating to the Chicago area, and Jill Marasa, principal of Costa Catholic Academy in Galesburg, is returning to the classroom. Also earning praise was Joy Allen, who stepped down as principal of Central Catholic High School in Bloomington after 23 years.

Msgr. Gerald Ward said he became pastor of St. Patrick Church of Merna in Bloomington at noon on June 10, 1991, and at 12:30 p.m. another area pastor said he needed to interview Allen so she could be named principal at Central Catholic. When he replied that he would, he was told, “You need to do that now, right now.”

“She has done so much for our community, but most of all she has guided us through some very difficult times for Central Catholic and the building program,” said Msgr. Ward, who has succeeded Father DeSutter at Blessed Sacrament in Morton. “She taught me so much about serving the church and being a servant of children in the school.”