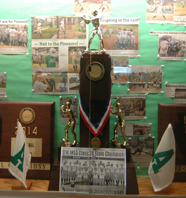 Photo Caption: Alleman’s Class 2A softball championship trophy is surrounded in a display at the Rock Island school by press clippings of the team’s state title run.

ROCK ISLAND — When the final out was recorded in Alleman High School’s 9-3 Class 2A state championship win over Teutopolis on June 7, shortstop Mackenzie Sanchez first looked for fellow senior and co-captain Anna Wetherell, who was racing in from her left field position.

“We did it! We won state!” the girls — four-year starters and the only seniors in the Pioneers’ starting line-up — screamed in a private celebration before joining teammates in a group hug near the pitcher’s mound at the Eastside Center complex in East Peoria.

That the moment of triumph was delayed for 43 minutes by rain and lightning in the final inning only added to the jubilation of this team returning Alleman to the pinnacle of softball programs in the state. The win brought the Pioneers their sixth softball state title, and first since 1998.
Head coach Mike Ebner said the girls understand that tradition and “want to hold it up, make their own mark.”

The 2014 Pioneers did that in several ways. Before their exciting state playoff run began, they had earned Alleman’s first Western Big 6 Conference softball title in 14 years, competing against much larger schools. The team’s balanced, powerful line-up combined for 32 home runs, the most in school history. They earned a reputation as the “cardiac kids” for their ability to come from behind on their way to a record of 32 wins and six losses.

The comebacks in the playoffs were especially thrilling.

“We wouldn’t let each other lose,” said Ebner, recalling being down 5-0 in regionals to Morrison and then erupting for 10 runs. In supersectional play, Alleman trailed 4-2 and had to rally “against the best pitcher we faced all year,” said Ebner. “We got a couple of hits, and then somehow got 10 runs. I’m still not sure how.”

“We all had faith in each other,” said Sanchez, who supplied much of the heroics in the final two games. She hit a go-ahead grand slam in the semifinal win over Monticello and a tie-breaking, two-run home run in the championship game to put Alleman ahead for good.

The team showed its Catholic faith, praying a team “Hail Mary” before each game and ending with “Mary, Queen of Victory, pray for us.”

Coach Ebner called the team “amazing kids who do things the right way,” especially crediting Sanchez and Wetherell for their hard work and leadership. Seventeen players dressed for the state tournament, said Ebner, and “everyone had their job.” Among them were the pitching tandem of starter Dakota Stout and closer Emily Hoffman, whose contrasting styles kept opponents off balance.

The jubilation of the championship win spilled over to the following day with media interviews and a welcome home celebration at Alleman’s Don Morris Gym, during which the team’s four seniors — Wetherell, Sanchez, Marissa Terronez and Shannon Cusack — presented the trophy to Colin Letendre, principal. It has since been placed, along with press clippings from the season, in a case across from the school office. Soon it will find a permanent home with five other state softball trophies in the hallway outside the gym.

Alleman’s six softball titles, earned in three different classes, place the school second only to Casey-Westfield’s seven in state history. With the returning talent of seven starters and excellent younger players coming up, expectations are high for next year even though this year’s win bumps Alleman into Class 3A for the next four years according to multiplier rules of the Illinois High School Association.

For now, Alleman is savoring this year’s championship.

“It was a great experience with a great group of girls,” Sanchez told The Catholic Post. “Better than I could ever ask for. I wish I could do it again.”