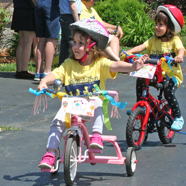 Photo Caption: Jordyn Twidwell and Mia Cashatt, both in pre-kindergarten at St. Mary School in Kickapoo, “Pedal for a Cure” to raise money for St. Jude Children’s Research Hospital on May 23..

KICKAPOO — Cancer may be a tough concept for students in pre-kindergarten and kindergarten to understand, but helping sick kids isn’t. That’s what made the littlest pupils at St. Mary School here big heroes as they rode their trikes and bikes to raise money for St. Jude Children’s Research Hospital on May 23.

“Everybody does service. It’s awesome and it grows,” said principal Gail Hulse. “Our littlest ones hear about what the Student Council does and they participate in some limited ways, but this is the first time it’s been totally theirs.”

Like the 18 children who organized and participated in the trike-a-thon, she sported a yellow t-shirt that proclaimed “St. Mary’s Pedals for St. Jude Kids” and “Pedal for a Cure.” So did their teachers, Jo Bienemann, pre-kindergarten, and CeeCee Stickelmaier, kindergarten, and their pastor, Father Joseph Dondanville, who was on the sidelines cheering them on as they traveled along Teddy Bear Drive, Huggins Circle and Honeycomb Walk.

“About a month ago I was looking at the St. Jude website and I saw that they sponsor trike-a-thons for the young kids. They provide all the resources, all the materials,” Bienemann told The Catholic Post. “They provide lessons for bike safety and there are also lessons about helping others.”

Stickelmaier liked the lessons, which included a story, video, coloring page and a rule for bike safety every day for five days. Throughout the ride the children were reminded to keep going and stay on the path, which were some of the rules they learned.

Students could only participate if they had a helmet, the first and most important rule, she explained.

Like their older classmates, the pupils in pre-kindergarten and kindergarten made posters to explain what they were doing, placed them in all the classrooms, and decorated coffee cans to accept donations. By the time the event started, they had collected $2,000 and the final tally was $2,200.

“We want them to feel better. We don’t want them to stay sick,” said kindergartner Ethan Maloof, a sentiment echoed by his friend Mitch Sager. Christopher McGrath added that they wanted to earn money to help the parents as well as make the children at St. Jude feel better.

“They get what they’re doing. They understand it,” Bienemann said, keeping an eye on her students as they circled the parking lot behind the school. “Kids helping kids. That’s what they know.”