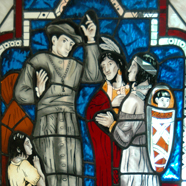 ROCK ISLAND — Bishop Daniel R. Jenky, CSC, will celebrate the 10:30 a.m. Mass at St. Mary Church here on Sunday, July 13, to kick off a year of focus in all Rock Island parishes on missionary priest Father John George Alleman, OP, who laid the foundation for Catholic faith in the region in the mid-1800s.

The Mass will be followed by a Family Festival at St. Mary — including lunch, games and music — until 2 p.m.

The special “Year of Father Alleman” will culminate with a closing celebration on July 14, 2015, marking the 150th anniversary of the pioneer priest’s death.

In a letter accompanying the decree by Bishop Jenky establishing the yearlong observance, the priests of the three existing Rock Island parishes expressed hope the celebrations will “lead to a renewed interest in Father Alleman” and “inspire a beautiful renewal within the Church present here in Rock Island.”

“As we look back over our local history, we see the fruits of his labor and very much appreciate his tireless service for Christ and to the Church,” wrote the Rock Island priests. Dated May 25, the letter was signed by Father Johnjoseph Logan, administrator of St. Mary and Sacred Heart parishes; Father R. Michael Schaab, then pastor of St. Pius X Parish; and Father Jeremy Freehill, parochial vicar of St. Pius X.

FOUNDED ST. MARY PARISH
St. Mary Church, located at 2208 4th Avenue, was selected as the site for the July 13 Mass and Family Fest because it traces its roots to 1851 and claims Father Alleman as its founding pastor.

Father Alleman began his missionary work in the upper Mississippi Valley in 1840. He served not only Catholic families on both sides of the river but also Native Americans of the Sac and Fox tribes, impressing them with his energy, kindness and devotion.

In 1851, his travels brought him to Rock Island. He became its first resident priest, and in the same year began to build the first church, known today as St. Mary of the Immaculate Conception.

Alleman High School in Rock Island, established in 1949, is named for the missionary priest and its team name of “Pioneers” reflects his work.

Yet, “there are a lot of people in Rock Island who don’t know who Father Alleman is,” said Father Freehill, who has been a key player in planning the special year. He noted that Father Alleman’s motto was: “I will plant, let others water, and leave it to God to increase.” Father Alleman enjoyed gardening, and it is claimed he produced a flower name “The Alleman Rose,” with one continuing to bloom at Alleman High School.

“This is a great opportunity to recall a man with great priestly zeal and charity,” Father Freehill told The Catholic Post. “He really was a pioneer. We are indebted to a man like him who gave his all. We’ve benefited from his efforts, and we continue to build upon them.”

EDITOR’S NOTE: A brief history on the life of Father Alleman may be viewed at allemanhighschool.org.