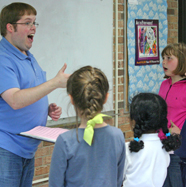 Music and ice cream are on the menu for an event to raise funds for the Cantus Choir School next Sunday, June 1, at St. Mary’s Cathedral in Peoria.

The school’s 14 students will present a short, informal concert of sacred and secular music at 5 p.m. under the direction of instructor Jacob Cox. They will be accompanied by Dr. Sherry Seckler, director of sacred music for the Diocese of Peoria and organist at St. Mary’s Cathedral.

Following the concert, ice cream and cookies will be served on the lawn of the bishop’s residence until 7 p.m.

Tickets are $5 per person and may be purchased from any of the students or by contacting Seckler at (309) 672-6447 or sseckler@cdop.org.

Seckler founded Cantus Choir School in 2010 to encourage a new generation of Catholics to sing.

“It’s a complex skill and you have to be able to read the language. How can you do that if nobody teaches you,” she asked.

The school utilizes the Ward Method, which was developed in 1929 by Juliette B. Ward. Based in Gregorian chant, it seeks to teach children the fundamentals of music while exposing them to the church’s musical heritage as they learn about the liturgy.

Cox, who has been trained in the first two of the method’s four books, said it uses all parts of learning. “Not only are you seeing it, but you’re saying it and you’re doing it. You’re moving.”

Now completing its fourth year, Cantus has students at three different skill levels. Beginning students meet on Monday afternoons, intermediate students have class on Tuesday afternoons and advanced students come together on Friday afternoons. They all meet on Thursdays to work on repertoire, according to Seckler.

“They pick up the music fast. We don’t have to drill much,” Seckler said.
St. Vincent de Paul School in Peoria hosts the classes for the students, who are in third grade through eighth grade.

Seckler donates her time, so the only costs for running the choir school at this time are for music and the stipend for Cox. He holds a bachelor’s degree in music with an emphasis in choral music from Western Illinois University and has a teaching certificate for kindergarten through high school. He has three years of teaching experience in public schools in Antioch and Galesburg.

“He is good with children. He comes to class prepared and he does a really good job with the Ward Method,” Seckler said of Cox. He also sings tenor in the Cathedral Choir.

Auditions for the Cantus Choir School are held at the beginning of each semester.